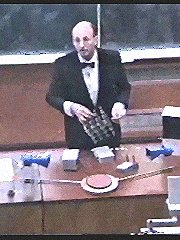 Professor of Structural Chemistry at the University of Manchester

As part of the 150th anniversary celebrations of the University of Manchester, the Department of Physics and Astronomy organised a special lecture, delivered by Professor J. R. Helliwell, reviewing Lawrence Bragg's association with the university and the many consequent contributions to X-ray crystallography. A notable feature of this lecture was the live demonstrations and experiments illustrating some of the scientific principles discussed.