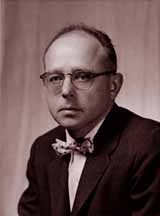 Clifford Glenwood Shull graduated from Schenley High School in Pittsburgh then received his BS from Carnegie Institute of Technology (now Carnegie Mellon University) in 1937. He entered Carnegie Tech to study aeronautical engineering, but after six months found himself drawn to physics. He received a PhD from New York University (NYU) in 1941. He was a teaching assistant at NYU from 1937 to 1941, a research physicist with the Texas Company (now Texaco) in Beacon, NY, from 1941 to 1946, and a research physicist at Oak Ridge National Laboratory from 1946 to 1955. Professor Shull moved to MIT (Massachusetts Institute of Technology) as a full professor in 1955 and retired in 1986, though he continued to visit his old research laboratory.

It was while at Oak Ridge that Professor Shull's pioneering work on neutron diffraction began. At that time, he said, "Scientists at Oak Ridge were very anxious to find real honest-to-goodness scientific uses for the information and technology that had been developed during the war at Oak Ridge and at other places associated with the wartime Manhattan Project." Professor Shull teamed up with the late Ernest Wollan, and for the next nine years they explored ways of using the neutrons produced by nuclear reactors to probe the atomic structure of materials.

Professor Shull's awards include the Buckley Prize, which he received from the American Physical Society in 1956, and election to the American Academy of Arts and Sciences (1956) and to the National Academy of Sciences (1975). In 1993 he received the Royal Swedish Academy of Sciences' Gregori Aminoff prize for his `development and application of neutron diffraction methods for studies of atomic and magnetic structures of solids.'

The information on this page is based on content at Nobelprize.org © The Nobel Foundation and an MIT press release. Photo courtesy MIT Museum