A major initiative of the IUCr and UNESCO, partnered by industry, to promote international cooperation and capacity building

The IUCr-UNESCO OpenLab is a network of operational crystallographic laboratories based in different countries worldwide, many in less endowed regions of Africa, South and Central America and South Asia. This initiative is aimed at allowing access to crystallographic knowledge and technology in all parts of the world, key for the fruitful development of science, and to open possibilities for conducting high-level research.

OpenLab is a joint initiative of the International Union of Crystallography and UNESCO, started as one of the main actions for the International Year of Crystallography 2014. Activities are normally conducted in partnership with major equipment manufacturers as well as with other institutions. OpenLabs in Africa are normally organised within the framework of the IUCr Initiative in Africa.

Chair of the IUCr Initiative in Africa: Claude Lecomte (claude.lecomte@univ-lorraine.fr)

The purpose of the IUCr-UNESCO OpenLab initiative is manifold:

An OpenLab normally combines crystallography lectures and hands-on tutorials with some science policy activities. Involvement of local Universities and institutions, and of the local scientific community is fundamental to guarantee a follow-up to the initiative and make it sustainable.

These OpenLabs are based in research centers where crystallographic instrumentation is already operational. These laboratories will host workshops, tutorials and hands-on experiments for students and young professors coming from the host and nearby countries.

A portable instrument will move through different locations in a country and at each stop it will serve as the basis for a crystallographic school, including tutorials about the use of the instrument and related software. A Travelling Lab has been implemented in Morocco in 2014.

Workshops are held in the factories of the diffractometer manufacturer companies. These workshops are open to students and young professors who already have some background in crystallography. They will also be focused on technical aspects and maintenance of crystallographic instrumentation. The STOE-Dectris-Xenocs OpenFactory has been implemented in 2014.

This map (current as of 18 June 2019) shows the OpenLabs held so far or planned, and some main events for IYCr2014. It is subject to change as new locations may be confirmed. Please check frequently for the latest version. 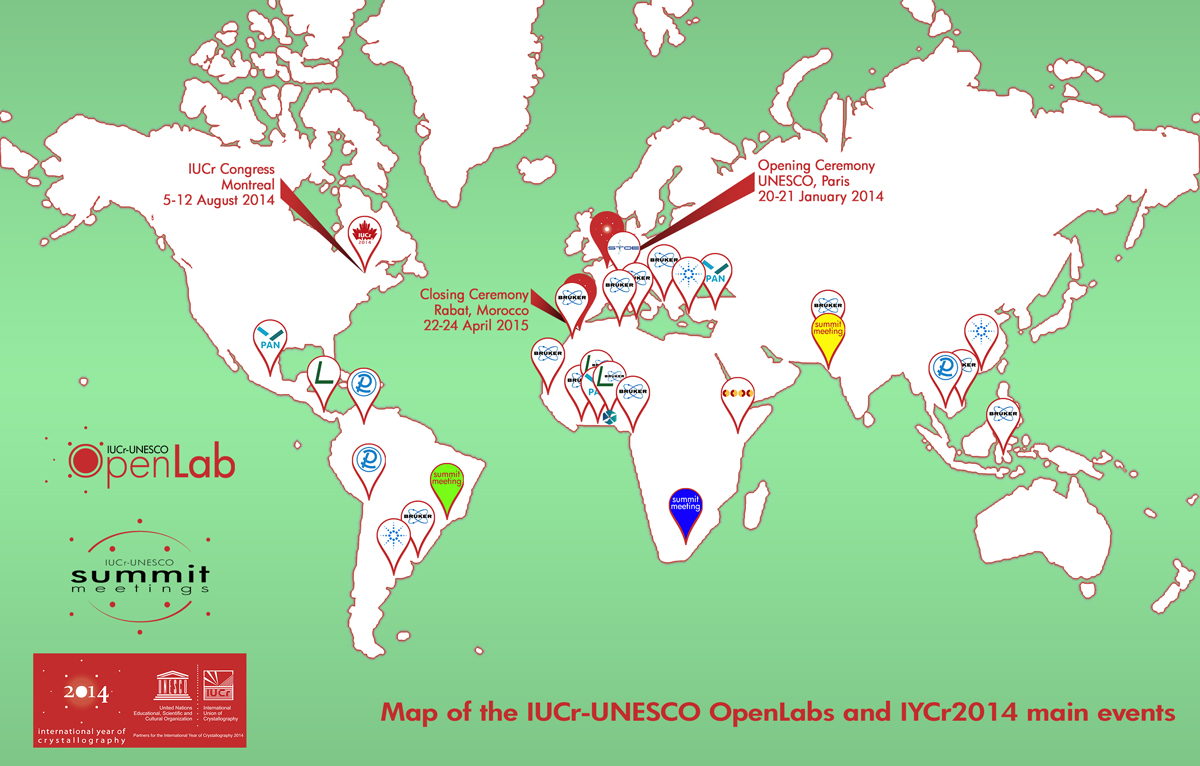