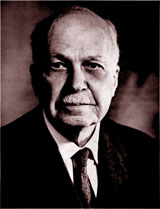 William Lawrence Bragg was awarded a first-class honours degree in mathematics by Adelaide University in 1908. He came to England with his father in 1909 and entered Trinity College, Cambridge, as an Allen Scholar, taking first-class honours in the Natural Science Tripos in 1912. In the autumn of that year he commenced his examination of the von Laue phenomenon and published his first paper on the subject in the Proceedings of the Cambridge Philosophical Society in November.

In 1914 Bragg was appointed as Fellow and Lecturer in Natural Sciences at Trinity College. From 1912 to 1914 he had been working with his father, and the results of their work were published in an abridged form in X-rays and Crystal Structure (1915). It was this work which earned them jointly the Nobel Prize for Physics in 1915, and from this year to 1919, W. L. Bragg served as Technical Advisor on Sound Ranging to the Map Section, G.H.Q., France. He was appointed Langworthy Professor of Physics at Manchester University in 1919, and held this post till 1937. He was Director of the National Physical Laboratory 1937-1938 and Cavendish Professor of Experimental Physics, Cambridge, from 1938 to 1953.

Together with his father, he published various scientific papers on crystal structure after their joint publication of 1915: The Crystalline State (1934), Electricity (1936), and Atomic Structure of Minerals (1937). His research interests later included the application of X-ray analysis to the structure of protein molecules, determining for the first time the structure of the highly complex molecules of living matter.