for discovering that methods developed for studying order phenomena in simple systems can be generalized to more complex forms of matter, in particular to liquid crystals and polymers 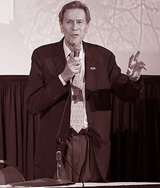 P. G. de Gennes was born in Paris, France, in 1932. He majored from the École Normale in 1955. From 1955 to 1959, he was a research engineer at the Atomic Energy Center (Saclay), working mainly on neutron scattering and magnetism, with advice from A. Herpin, A. Abragam and J. Friedel (gaining his PhD in 1957). During 1959 he was a postdoctoral visitor with C. Kittel at Berkeley, and then served for 27 months in the French Navy. In 1961, he became assistant professor in Orsay and soon started the Orsay group on supraconductors. Later, in 1968, he switched to liquid crystals. In 1971, he became Professor at the Collège de France, and was a participant of STRASACOL (a joint action of Strasbourg, Saclay and College de France) on polymer physics.

From 1980, he became interested in interfacial problems, in particular the dynamics of wetting, and also the physical chemistry of adhesion.

P.G. de Gennes received the Holweck Prize from the joint French and British Physical Society; the Ampere Prize, French Academy of Science; the gold medal from the French CNRS; the Matteuci Medal, Italian Academy; the Harvey Prize, Israel; the Wolf Prize, Israel; the Lorentz Medal, Dutch Academy of Arts and Sciences; and polymer awards from both APS and ACS.