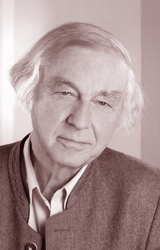 Huber began his studies of chemistry at the Technische Hochschule (later Technische Universität) in München in 1956, obtaining a diploma in chemistry in 1960. He joined the crystallographer W. Hoppe's laboratory for his diploma work on crystallographic studies of the insect metamorphosis hormone ecdysone. Part of these studies were done in Karlson's laboratory at the Physiologisch-Chemisches Institut der Universität München, where he found by a simple crystallographic experiment the molecular weight and probable steroid nature of ecdysone which Hoppe and he later elucidated in atomic detail after his thesis work which was on the crystal structure of a diazo compound (1963).

After a number of structure determinations of organic compounds and methodical development of Patterson search techniques, he began in 1967, with Hoppe's and Braunitzer's support, crystallographic work on the insect protein erythrocruorin (with Formanek). The elucidation of this structure and its resemblance to the mammalian globins, as determined by Perutz and Kendrew in their classical studies, suggested for the first time a universal globin fold. In 1971 he accepted a chair of structural biology at the Biozentrum, University of Basel, and the position of a director at the Max-Planck-Institut für Biochemie. He also remained associated with the Technische Universität München, where he became a Professor in 1976. In 1970, he began work on the basic pancreatic trypsin inhibitor (which later became the model compound for the development of protein NMR), molecular dynamics and experimental folding studies in other laboratories. Work in the field of proteolytic enzymes and their natural inhibitors has been continued and extended to many different inhibitor classes, proteases, their proenzymes, and complexes between them (with Bode, Bartels, Chen, Fehlhammer, Deisenhofer, Loebermann, Kukla, Papamokos, Ruhlmann, Steigemann, Toknoka, Wang, Walter, Weber, Wei) including recently inhibitors of cysteine proteases (with Musil, Bode, Engh) and other hydrolytic enzymes like a-amylase (with Pflugrath, Wiegand) and creatine hydrolase (with Hoeffken). These systems have great potential for drug and protein design.

Early in the 1970s he initiated work on immunoglobulins and their fragments, which culminated in the elucidation of several fragments, an intact antibody and its Fc fragment, the first glycoprotein to be analysed in atomic detail (with Colman, Deisenhofer, Epp, Marquart, Matsushima). Work was extended to proteins interacting with immunoglobulins and to complement proteins (with Paques, Jones, Deisenhofer). They also studied a variety of enzymes leading to the elucidation of the structure and the chemical nature of the selenium unit in glutathione peroxidase (with Ladenstein, Epp). They determined the structures of citrate synthase in different states of ligation (with Remington, Wiegand) and later of a very large multienzyme complex, heavy riboflavin synthase (with Ladenstein).

Early in the 1980s he studied proteins involved in excitation energy and electron transfer, light-harvesting proteins (with Schirmer, Bode), bilin-binding protein, the reaction centre (with Deisenhofer, Epp, Miki in collaboration with Michel) and ascorbate oxidase (with Messerschmidt, Ladenstein). Some of the proteins analysed showed large-scale flexibility which was functionally significant. The trypsinogen system was investigated (with Bode) in great detail by low-temperature crystallography, gamma-ray spectroscopy, chemical modification and molecular dynamics calculations.

In 2007 he became Visiting Professor at Cardiff University, Wales, and at KGIT, Korean German Institute of Technology, Seoul, Korea. He has been awarded the Otto-Warburg Medal, the Emil von Behring Medal, the Sir Hans Krebs Medal, the The Linus Pauling Medal and the Max Tishler Prize.

The information on this page is based on content at Nobelprize.org © The Nobel Foundation and Robert Huber's page at MPI Biochemie.