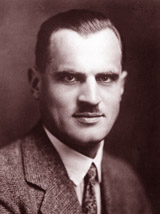 Like his older brothers (Karl and Wilson, who would serve as the presidents of MIT and Washington State College, respectively) he attended the University of Wooster, OH, obtaining his BSc in 1913. He then moved to Princeton to study for his PhD which he obtained in 1916. He began his academic career at the University of Minnesota in 1916, where he taught for a year before becoming a research engineer at the Westinghouse Lamp Company in Pennsylvania. He was awarded a National Research Fellowship in physics, and went to study at the Cavendish Laboratory at Cambridge University in 1919-20. Returning to the US he became professor of physics and head of the physics department at Washington University. During his time at Washington University he discovered an `X-ray scattering effect' that came to be known as the `Compton effect'.

The information on this page is based on content at Nobelprize.org © The Nobel Foundation and Washington University in St Louis' obituary of Arthur Compton.