Herbert A. Hauptman and Jerome Karle 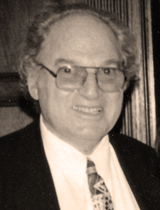 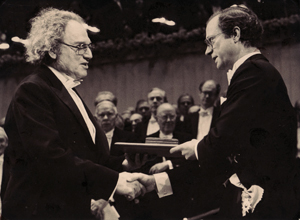 Hauptman obtained a BS degree in mathematics from the City College of New York (1937) and an MA in mathematics from Columbia University (1939). After the war he commenced a collaboration with Jerome Karle at the Naval Research Laboratory in Washington, D.C. (1947) and at the same time enrolled in the PhD program at the University of Maryland, tackling the phase problem of X-ray crystallography, his doctoral dissertation being entitled "An N-Dimensional Euclidean Algorithm". By 1954 he had received his PhD and he and Dr Karle had laid the foundations of the direct methods in X-ray crystallography. Their 1953 monograph, "Solution of the Phase Problem I. The Centrosymmetric Crystal", contains the main ideas, the most important of which was the introduction of probabilistic methods, in particular the joint probability distributions of several structure factors, as the essential tool for phase determination.

In 1970 he joined the crystallographic group of the Medical Foundation of Buffalo, replacing Dr Dorita Norton as Research Director in 1972. During the early years of this period he formulated the neighborhood principle and extension concept, the latter independently proposed by Giacovazzo under the term "representation theory". These ideas laid the groundwork for the probabilistic theories of the higher order structure invariants and seminvariants which were further developed during the late 1970s by Hauptman and others. During the 1980s he initiated work on the problem of combining the traditional techniques of direct methods with isomorphous replacement and anomalous dispersion in an attempt to facilitate the solution of macromolecular crystal structures. This work continues to the present time. More recently he formulated the phase problem of X-ray crystallography as a minimal principle in the attempt to strengthen the existing direct methods techniques along with colleagues Charles Weeks, George DeTitta and others.

The Hauptman-Woodward Medical Institute has published an obituary.

The information on this page is based on content at Nobelprize.org © The Nobel Foundation. Photographs provided by the ACA