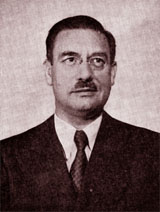 Debye received his early education at the elementary and secondary schools in his home town. He continued his studies at the Aachen Institute of Technology (Technische Hochschule) and gained a degree in electrical technology there, in 1905. This led to his appointment as Assistant in Technical Mechanics at the Aachen Technological Institute, where he worked for two years. In 1906 Debye obtained a similar position in theoretical physics at Munich University, where he qualified as a university lecturer in 1910 (having obtained this university's PhD in physics in 1908).

In the following year, 1911, Debye became Professor of Theoretical Physics at Zurich University, where he remained for two years. He returned to The Netherlands in 1912 when he was appointed Professor of Theoretical Physics at Utrecht University, and in 1914 he moved to the University of Göttingen, to take charge of the Theoretical Department of the Physical Institute. Later, he became Director of the entire Institute and lectured on experimental physics until 1920.

In 1915 Professor Debye became Editor of Physikalische Zeitschrift and continued to act in this capacity until 1940.

Debye returned to Zurich in 1920, as Professor of Physics, and Principal of the Eidgenössische Technische Hochschule. In 1927 he held the same post at Leipzig and from 1934 to 1939 he was Director of the Max Planck Institute of the Kaiser Wilhelm Institute for Physics in Berlin-Dahlem and Professor of Physics at the University of Berlin.

In 1940 he left Europe for the US, where he became Professor of Chemistry and Principal of the Chemistry Department of Cornell University, Ithaca, New York, taking American citizenship in 1946.

Professor Debye's devotion to his work gained him many distinctions, and Honorary Doctorates were conferred upon him by the following universities and learned institutes: Brussels and Liège; Oxford; Sofia; Mainz; Technische Hochschule, Aachen; Eidgenösissche Technische Hochschule, Switzerland; and in the United States: Harvard; St Lawrence; Colgate; Notre Dame; Holy Cross; Brooklyn Polytechnic; Boston College; Providence College. He held the Rumford Medal of the Royal Society, London, and the Franklin and Faraday Medals, the Lorentz Medal of the Royal Netherlands Academy, the Max Planck Medal (1950) awarded by the West Germany Physical Society, the Willard Gibbs Medal `Chicago (1949), the Nichols Medal (1961), the Kendall Award (Miami, 1957), and the Priestley Medal of the American Chemical Society (1963); and was appointed Kommandeur des Ordens Leopold II in 1956.

The information on this page is based on content at Nobelprize.org © The Nobel Foundation. See also the obituary of Peter Debye published in Acta Cryst. A (1967), 22, 947-949