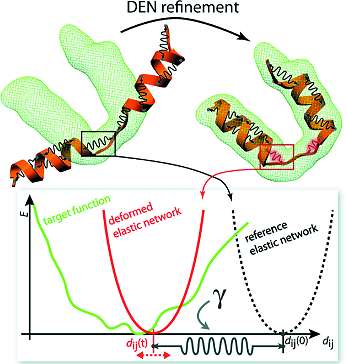 A refined approach to proteins at low resolution

Membrane proteins and large protein complexes are notoriously difficult to study with X-ray crystallography, not least because they are often very difficult, if not impossible, to crystallize, but also because their very nature means they are highly flexible. The result is that when a structure can be obtained it is often of low resolution, ambiguous and reveals a mosaic-like spread of protein domains that sometimes create more puzzles than they solve. [Schröder, Levitt & Brunger. (2014), Acta Cryst. D70, 2241-2255; doi: 10.1107/S1399004714016496 ]

Now, Gunnar Schröder of the Institute of Complex Systems at the Forschungszentrum Jülich and the University of Düsseldorf, Germany and colleagues at Stanford University School of Medicine, USA have reviewed their earlier refinement technique known as Deformable Elastic Network (DEN) and found ways to optimize it successfully for the investigation of several particularly problematic protein structures including soluble proteins and membrane proteins up to a resolution limit ranging from 3 to 7Å.

The team explains that advances in X-ray technology and light sources have in recent years led to structures for previously intractable proteins such as the ribosome, transcription complexes and even viruses. The details then lie in a successful refinement that can provide valuable information about the structure in question despite lower resolution than would normally be desirable. "The interpretation of low-resolution diffraction data is generally difficult," the team says, "owing to the unfavorable ratio of parameters (variable degrees of freedom, such as flexible torsion angles or Cartesian atomic coordinates) to observables (observed diffraction intensities)." Ambiguities and errors of interpretation abound.

The DEN approach begins with a model, a prediction, of the target structure containing as much information as is known ahead of the insertion of the diffraction data, and determines which features of the model ought to be adjusted to fit the diffraction data emerging from the X-ray experiments. In other words, a null hypothesis is applied; those parts of the model not predicted to alter the diffraction data are retained as is. Distances between randomly chosen pairs of atoms within the structure are tested and tweaked accordingly within a distance restraint, customarily referred to as the elastic network.