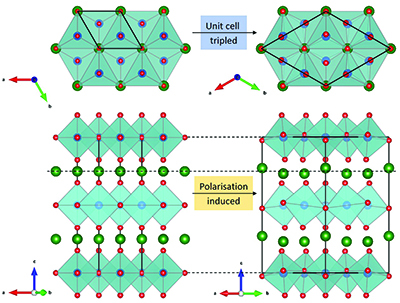 Ever since Pierre Curie conjectured on “the symmetry in physical phenomena, symmetry of an electric field and a magnetic field” in 1894, it has long been a dream for material scientists to search for this rather unusual class of material exhibiting the coexistence of magnetism and ferroelectricity in a single compound known as a multiferroic compound.

Multiferroic materials are a class of crystalline material which exhibit a number of unique properties, in which at least two order parameters exist simultaneously: ferro- (or antiferro-) magnetic, ferroelectric and ferroelastic degrees of freedom. These properties give rise to a number of useful and practical applications such as memory devices and sensors. Even though multiferroic materials are relatively commonplace much is still not known about their molecular make-up and properties. This article [Sim et al. (2016), Acta Cryst. B72, 3-19; doi: 10.1107/S2052520615022106] presents an extended and comprehensive review of the structure and multiferroic properties of the hexagonal rare-earth manganite RMnO3, in which there are ferroelectric and magnetic orders. Strong interaction between these orders causes a series of interesting properties of multiferroics. The review describes multiferroics with antiferromagnetic and ferroelectric orders. A commentary about this paper has also been commissioned [Pirogov (2016), Acta Cryst. B72, 1-2; doi: 10.1107/S2052520616001062].

Thanks to the extensive volume of works carried out in this field worldwide over the past decade or so, the list of materials exhibiting multiferroic behaviour has expanded far beyond the few that were studied in Russia in the 1960s. This experimental renaissance of multiferroic physics gives a long overdue justification to the earlier pioneering theoretical works and judging by the pace of current research is set to continue well into the 21st century.