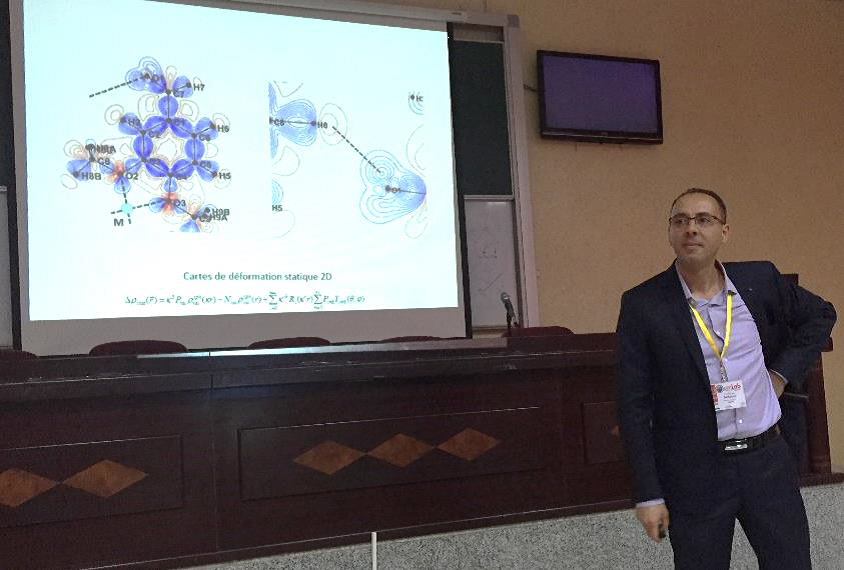 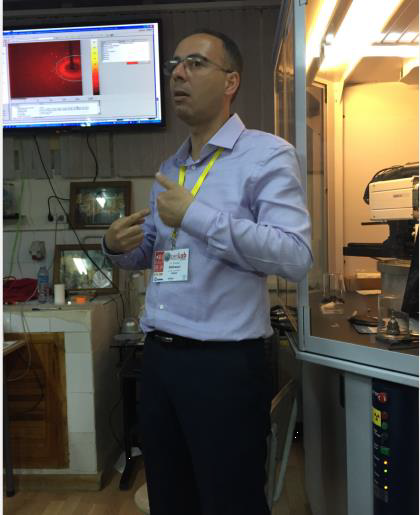 Slimane Dahaoui at the IUCr-UNESCO OpenLab in Constantine (Algeria) in May 2015.

We are deeply saddened to announce the death of our beloved friend and colleague Slimane Dahaoui (1967-2018). Slimane died from a blistering heart attack at home on Friday April 27th, 2018. The brutal and unexpected death of Slimane was a shock to his family, friends and colleagues.

Slimane was an example of modesty, generosity and kindness. He was always paying attention to others, open-minded and always ready to give help and selfless advice to people surrounding him, especially Master, PhD students and young researchers. Slimane was devoted to his work which he fulfilled with discretion and humility. We will always remember his professionalism, his skills and his solicitude.

Slimane received his Master’s degree in Tlemcen (Algeria) in 1989 and arrived in our laboratory in September 1991. As he had no grant to pay his studies, he had to work as a washer-upper in restaurants, night watchman in an old people’s home and teacher in physics in private schools preparing students for medical jobs. He also taught as an ATER at the Pharmacy faculty from 1995 to 1997. He passed his PhD under Niels K. Hansen’s supervision in September 1996, on the subject of high-resolution crystal structures of non-linear optics materials of the KTP family. He met his future wife Valérie in 1990, who was also a PhD student in our laboratory and is now a computing engineer. Slimane and Valérie had two daughters, Sonia and Sarah, of whom he was very proud.

From September 1997 to July 1999, he worked as a post-doctoral fellow under the leadership of Professor Judith A. K. Howard at the University of Durham. This experience was a turning point in his scientific career. Meanwhile, in collaboration with his colleagues at Nancy and Grenoble, he was one of the first to collect and analyse high-resolution diffraction data with a CCD detector for electron density modeling [Dahaoui, S., Jelsch, C., Howard, J. A. K. & Lecomte, C. (1999). Charge density study of N-acetyl-L-tyrosine ethyl ester monohydrate derived from CCD area detector data. Acta Cryst. B55, 226-230]. He came back to Nancy in August 1999 as a Research Engineer at the LCM3B (which later became CRM2) and was appointed Senior Lecturer in January 2001.

Slimane participated in the training of many Master, PhD students, post-doctoral fellows and French and foreign researchers, some of whom now hold important positions in various laboratories and research structures. He managed to impart his enthusiasm, his scientific curiosity and his critical mind for subtle structural analysis. He contributed greatly to several Franco-Algerian projects between LCM3B-CRM2 and Algerian laboratories. Since 2003, he was also a member of the scientific council of the CRAPC (Centre de Recherche Scientifique et Technique en Analyses Physico-Chimiques) of Bou Ismail, Algeria.

His passion for high-resolution X-ray diffraction experimental measurements contributed highly to the renown of our laboratory. Thus, he invented and developed an original sublimation device for crystal synthesis. This device, which was made at CRM2, was exported to other research laboratories in France and in Algeria. Among the outstanding results of his research, one can mention as examples: García, P., Dahaoui, S., Katan, C., Souhassou, M. & Lecomte, C. (2007), On the accurate estimation of intermolecular interactions and charge transfer: the case of TTF-CA, Faraday Discussions 135, 217-235 (0.5 e!); or the study of an isostructural phase transition in m-carboxyphenylammonium monohydrogenphosphite [Bendeif, E.-E., Dahaoui, S., François, M., Benali-Cherif, N. & Lecomte, C. (2005), Acta Cryst. B61, 675-688].

In 2007, Slimane was appointed head of the structural and crystallographic analysis platform at the University of Lorraine. Throughout his career, he was concerned about the development of the CRM2 so that it remains a national and international reference for training and research in crystallography and accurate structural analysis. His latest research was mainly focused on the elaboration and analysis of silver complexes for medical applications.

We miss you so much and will always do.