Crystallography around the world: Hungary

This is a list of forthcoming meetings in Hungary that are recorded in the IUCr Calendar of Events. Please let us know of any that are missing by completing this form or sending an email to forthcoming.meetings@iucr.org.

Reports of past activities in Hungary

The Hungarian Academy of Sciences has many Research Institutes where crystallographic research is performed. The X-ray Laboratory of the Research Inst. for Solid State Physics and Optics (RISSPO) of the Hungarian Academy of Sciences (HAS) (www.szfki.hu) is led by G. Faigel (gf@szfki.hu). Six investigators in the group study phase retrieval methods, X-ray holography and single molecule imaging using powder and single crystal diffraction from liquid nitrogen temperature to 600 K. Significant recent results include structure determination of new fullerene compounds such as alkali-C60, cuban-C60 and C70 (G. Bortel, G. Oszlányi), atomic resolution X-ray holography (G. Faigel, M. Tegze), the introduction of the 'charge flipping' phase retrieval method (G. Oszlányi, A. Sütő) and the modeling of the Coulomb explosion of single molecules in a hard XFEL pulse (G. Faigel, Z. Jurek). 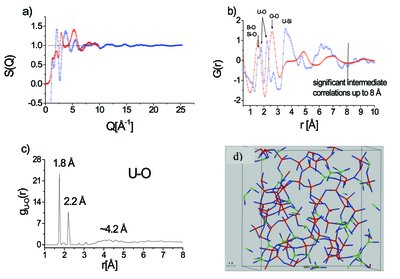 In 1928 Z. Gyulai and D. Hartly designed the first experiments to detect crystal imperfections. Gyulai observed that the tensile strength of NaCl whiskers depends on their diameters and can be nearly as high as that theoretically calculated for perfect crystals. He and I. Tarján grew synthetic quartz crystals in the early fifties. I. Tarján arranged for Hungary to join the IUCr in 1963 and was a co-author of the Laboratory Manual on Crystal Growth (1972). A pamphlet An Introduction to Crystal Physics was written by E. Hartmann (1984, 1998) for the Teaching Commission of IUCr. Currently, L. Kovács (lkovacs@szfki.hu) supervises sixteen researchers dealing with the growth and characterization of nonlinear optical crystals within the RISSPO.

Single crystal X-ray diffraction research was introduced in Szeged by I. Náray-Szabó (a student of L. Bragg, 1928-1930) in 1930. Together with K. Sasvári he solved several structures (e.g. cryolite) and with a generalization of crystal isomorphism he defined the descriptors of the 'sister structures' in 1943. In 1948 young physicists under the guidance of Sasvári started to work on various applications of X-ray diffraction at the Eötvös Loránd U. Since 1958 an X-ray laboratory (chaired by Náray-Szabó) in the Central Research Inst. of Chemistry, HAS, has studied inorganic and organic crystals, organosulfur compounds (spirosulfuranes), organo-silicon compounds (silatranes), clathrates, inclusion compounds and compounds of biological importance.

Beginning in the eighties, the study of polymorphic isostructurality and supramolecular chemistry became the focus of interest while the Dept. of X-ray diffraction was directed by A. Kálmán for thirty years. The reorganised X-ray diffraction laboratory in the Inst. of Structural Chemistry, Chemical Research Center, HAS (www.chemres.hu) is now under the supervision of M. Czugler (mcz@chemres.hu). The five members of the Laboratory (A. Kálmán, L. Párkányi, P. Bombicz, V. Hegedűs-Kudar and T. Holczbauer) are interested in crystal engineering, supramolecular chemistry, solid state reactions, and low resolution structures of 10-700 µ size crystals of organic, metal-organic, inorganic and protein structures, soft anionic system design and non-standard crystallization techniques with national and international collaborations. In the Laboratory for Powder Diffraction in the Inst. of Nanochemistry and Catalysis at HAS I. Sajó (sajo@chemres.hu) pursues structural research and phase analysis.

CH ↔ NH. An example for annular desmotropy of three pairs of seven-membered heterocycles confirmed by X-ray crystallography. Desmotropy (tautomerism in solid state) is uniquely demonstrated by three pairs of 4,1-benzodiazepines. The desmotropes are visibly distinguished by the puckering of the hetero-rings governed by the flopping (CH↔NH) hydrogen atoms. Holczbauer T., Fábián L., Csomós P., Fodor L., Kálmán A., CrystEngComm 12, 1712, 2010.

The Laboratory for Single Crystal X-ray Diffractometry established in 1995 at the U. of Debrecen, Inst. of Chemistry. (puma.unideb.hu/~xray) is directed by A. Bényei (abenyei@delfin.unideb.hu). His main research concerns organometallics, guanidine salts of water soluble phosphanes and their transition metal complexes, and polymorphism of pharmaceutical compounds. A recent discovery of racemic conglomerates stimulated research into techniques to achieve spontaneous resolution of these enantiomers. Application of Continuous Symmetry Measures in the comparison of hydrogen bonds represents a new direction of supramolecular research in Debrecen. In the field of macromolecular crystallography, T. Barna (Dept of Genetics and Molecular Biology) has been studying reductases and their complexes with environmentally important substrates, antifungal (PAF, NMR structure in the PDB: 2KCN) and human proteins. Powder diffraction and nanolayer studies are performed by M. Kis-Varga in the Inst. of Nuclear Research of HAS and routine powder diffraction measurement is done at the TEVA Pharmaceutical Works Ltd, Debrecen. Several graduate and undergraduate students including G. Paragh, Z. T. Nagy, C. Fekete and R. Elek are engaged in crystallographic studies.

In the Liquid Structure Laboratory at HAS (www.chemres.hu) T. Megyes, I. Bakó and S. Bálint study liquid structures by experimental (X-ray and neutron diffraction), molecular dynamic simulation and ab initio methods. The focus of their studies includes intermolecular interactions, hydrogen bonding, and ion solvation in pure solvents and their mixtures. Bulk solvent structures in complex solutions are compared with pure solvent structures and the changes in the orientation of solvent molecules in the first coordination shell are analyzed. Self-assembling supramolecules are another focus. 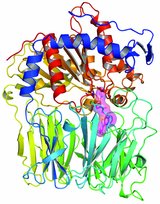 Inhibitor molecule (shown in magenta with molecular surface) bound at the active site of prolyl oligopeptidase.

The Protein Crystallography Laboratory at ELTE was founded by G. Náray-Szabó and Z. Böcskei in 1993 with the acquisition of a diffractometer suitable for the biochemical and molecular biological research of many groups in Hungary including scientists in the Dept. of Biochemistry at LEU, the Inst. of Enzymology, and the Agricultural Biotechnology Centre where graduate and PhD students are trained in the field of protein crystallography. In 2006 the Laboratory joined the Laboratory of Structural Chemistry and Biology to study the structure, dynamics and interactions of proteins and peptides (www.chem.elte.hu/departments/protnmr). Targets for study have included metal preference, mechanism of action and substrate specificity of tryspin, chymotrypsin and prolyl oligopeptidase, the prototype of a new protease family, enzyme mechanisms and substrate specificity. Studies on proteases of the complement cascade system, an important element of innate immunity, have produced detailed models of their autoactivation mechanism, the first enzymatic event of the complement, and protein/protein interactions. C1-inhibitor, the natural inhibitor of these enzymes is of pharmacological interest. Its crystal structure shed light on the structural basis of the anti-inflammatory effect of heparin, which influences C1-inhibitor-protease complexes. In contrast to the conservative substrate hosting of the studied proteases, the prototype calcium sensor protein calmodulin showed protein/ligand interactions of a highly adaptive and promiscuous nature in its complexes with small molecular drugs and drug candidates explaining their different effects on calmodulin function. dUTPases have essential role in preventive DNA repair via exclusion of uracil and contribution of dTTP biosynthesis. Structures of dUTPase mutants and variants from different species help elucidate the role of conserved amino acid residues that could provide the basis of designing selective inhibitors.

The chair of the National Committee of the IUCr in Hungary is G. Faigel. Past-Chair is A. Kálmán, Secretary is P. Bombicz. Members: A. Bényei, L. Kovács, L. Kőszegi, J. Lábár, G. Náray-Szabó, G. Radnóczi, I. Sajó, K. Simon, E. Sváb, T. Ungár and T. Weiszburg. The Hungarian Synchrotron Committee organizes meetings and workshops connected to X-ray crystallography. Both of these committees work under the auspices of the Physical Section of the HAS.

A. Kálmán served the IUCr as a member of the Executive Committee from 1984, and was the Vice-President of the Union between 1990-1993. P. Bombicz has been a member of the IUCr Commission on Structural Chemistry since 2005, succeeding previous Hungarian representatives A. Kálmán and K. Simon. From 1990 to 2000 A. Kálmán co-edited Acta Crystallographica B and C, and M. Czugler has been a co-editor of Acta Crystallographica E since 2006.

There is significant activity in the field of crystallography in the pharmaceutical companies Gedeon Richter, EGIS and Sanofi-Aventis (Chinoin). These industrial labs use mainly powder X-ray diffraction for analytical purposes. EGIS pharma company lately installed an R-Axis SPIDER for single crystal diffraction studies. 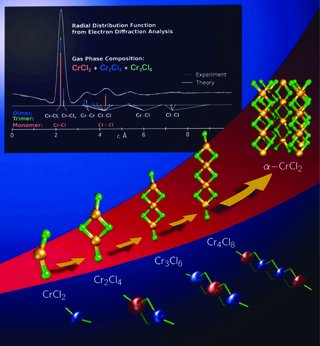 Results from the electron diffraction study of chromium dichloride of complex vapor composition. Its structure illustrates all vibronic interactions: the monomeric molecule exhibits the Renner-Teller effect, its dimer the pseudo-Jahn-Teller effect, and its crystals the Jahn-Teller effect. The oligomers as well as the crystal display antiferromagnetic coupling.

A strong research group for molecular structure studies has developed since 1965 at the Hungarian Academy of Sciences - currently located at the Budapest Univ. of Technology and Economics under the name Materials Structure and Modeling Research Group. Its leading scientists are Istvan Hargittai (istvan.hargittai@gmail.com) and Magdolna Hargittai (hargittaim@mail.bme.hu). The group's main experimental technique has been gas-phase electron diffraction together with mass spectrometry. Their experimental data have been augmented by various spectroscopic information, and, increasingly, by quantum chemical calculations. The group focuses on the structural variations and modeling of free molecules, and has often performed joint work and comparisons with crystallographic studies.

Currently, one of their main interests is in structural peculiarities in metal halides under the leadership of Magdolna Hargittai. They have been involved with determining rare structural effects due to vibronic (vibrational-electronic) interactions - the Jahn-Teller, Renner-Teller, and pseudo-Jahn-Teller effects - and relativistic effects. They discovered several unexpected structural features, such as the effect of spin-orbit coupling and of the 4f orbital occupation on molecular geometry and found examples of antiferromagnetic coupling and spin-crossover in gas-phase metal halide structures combining data from a plethora of techniques. Lately they have also been involved with determining the structural relationship between the gas-phase and crystal-phase structures of metal halides.

Istvan Hargittai is the Editor-in-Chief of Structural Chemistry (Springer-Verlag), an international journal in its 22nd year of publication.

Find further information on the research groups at www.amkcs.ch.bme.hu.