Minutes of the AsCA Council Meeting 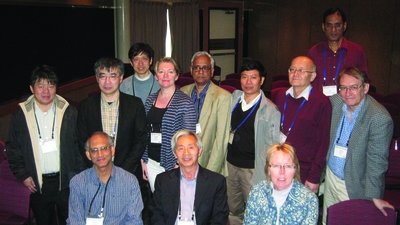 IUCr President G. R. Desiraju presented an overview of the current activities of the IUCr. He commented on the growth of the community within AsCA and the high quality of talks and, particularly, the larger number of students in attendance. He described the International Year of Crystallography (IYCr) 2014 as an opportunity to highlight our science throughout Asia, including at the high-school level. UNESCO is willing to support a traveling exhibition of crystallographic equipment that will go to smaller Asian countries (Indonesia, Philippines, Vietnam and Bangladesh) to educate and inspire young people. Desiraju suggested that the larger countries (Australia, China and India) could play an important role in promoting crystallography in the region. He urged them to send their manuscripts to IUCr Journals and to help in gathering funds or in-kind contributions to support IYCr2014. He has asked that all National committees formulate plans for IYCr and communicate their plans to the IUCr. The IUCr encourages activities such as the publication of textbooks about crystallography in various languages to teach our science to the next generation of crystallographers. The IUCr has appointed a project manager to promote IYCr activities. All communications about regional activities should be sent to the project manager.

IUCr Newsletter editor, W. L. Duax, urged attendees to send articles describing crystallographic activities and achievements in AsCA countries and especially plans for IYCr activities to him for publication in the Newsletter of IUCr. The Newsletter is sent electronically to all crystallographers in the IUCr database. Printed copies are also sent to libraries. If individuals would like to have copies sent to their local library they should send the name and address of the library to Duax. If you would like to have hard copies to distribute at meetings that you host or attend, notify the Newsletter office. Duax has asked everyone to identify a crystal that made a significant difference to the world (or just to them) and to write a paragraph explaining their choice. If published the author will receive two glasses with the structure of their 'Most Important Crystal' etched on the surface.

Samar Hasnain, the newly appointed Editor in Chief of the IUCr journals, spoke about his vision for the IUCr Journals. His presentation is entitled 'Responding to a new era of crystallographic-based science and changes in its global distribution'.

His aims for the future development of the IUCr journals are:

Meeting report: Ray Withers reported that AsCA2012/Crystal28 was running smoothly with three concurrent sessions, over 425 attendees and the prospect of a modest sum balance. R. Withers also reported on the Bragg Symposium. The expectation is that there will be ∼350 delegates including school children. The city of Adelaide would unveil a bust of Lawrence Bragg on Friday, December 7th.