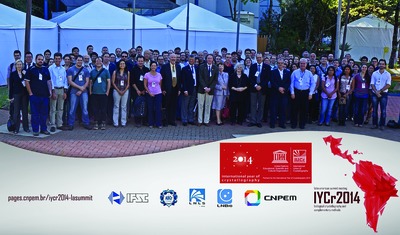 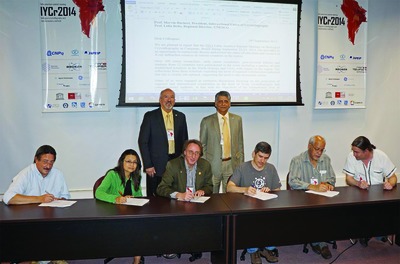 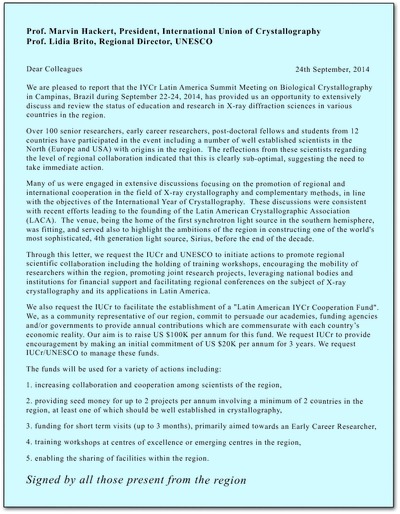 The IYCr2014 Latin America Summit Declaration took the form of an Appeal letter, with 67 signatories. The declaration from the IYCr2014 South Asia Summit and other IYCr2014 declarations can be viewed at www.iycr2014.org/declarations.

The IUCr-UNESCO Latin American Summit took place in Campinas, Brazil, September 22-24, with support by Funding Agencies CNPq, CAPES and FAPESP, sponsorship by Molecular Dimensions, Bruker, NanoTemper, Agilent, GE Healthcare, Rigaku/Dairix, Formulatrix, Astex, TTP Labtech and Incoatec, and Institutional Partnerships with CNPEM, LNBio, LNLS, ABCr and IFSC. This was the second summit meeting of the IYCr, where the scientific theme was biological crystallography and complementary methods. Over 100 senior scientists, young researchers, post-doctoral fellows and students from 12 countries met during the summit meeting held at the LNLS in Campinas.

Delegates enjoyed a mix of lectures on the history of Latin American crystallography, and examples of current cutting-edge research and the collaborative programs that are taking place in Latin America. We learnt how initiatives such as CeBEM have contributed to increased collaboration and strengthening of crystallography by providing funds for training courses, exchanges and sharing of facilities.

Marvin Hackert (President, IUCr) gave the opening lecture on IYCr2014 and the role and benefits of the OpenLabs and summit meetings. Lidia Brito, Regional Director for Latin America for UNESCO, spoke about the partnership of UNESCO with the IUCr for IYCr2014. Glaucius Oliva (IFSC/USP) presented an overview of the history of crystallography in Latin America, while Antônio José Roque da Silva (LNLS) presented a glimpse of the future with the construction of a fourth-generation synchrotron (Sirius) at Campinas. It became clear during the meeting how much progress has been made in biological crystallography in Latin America over the last 25 years, with dozens of groups where there were previously none. The LNLS has had a central role in making this possible by giving access to equipment as well as financial support to groups spread around the region.

A memorable highlight was the keynote lecture given by Nobel Laureate Ada Yonath who discussed the progress to design better therapeutics from our understanding of the structure of the ribosome. She was given a standing ovation at the close of her talk. Another highlight was a round-table discussion mediated by Samar Hasnain (Editor-in-Chief of IUCr Journals) where the panelists reflected on the changes, opportunities and challenges facing the further development of crystallography in Latin America. At the close of the final session, a petition was presented and unanimously approved by those attending to ask for continued support from the IUCr and UNESCO to promote regional scientific collaborations in Latin America, with a pledge to partner in supporting these activities from regional resources. More information and a full description of the program can be found on the IYCr website under summits (http://www.iycr2014.org).

The summit was a clear success both scientifically and in generating the enthusiasm of working together for strengthening crystallography in Latin America. The success of the event was due to the positive spirit of the participants and the hard work of the local organizers Richard Garratt, Andre Ambroiso, Iris Torriani and Glaucius Oliva.