MS34: Crystals and beyond

This microsymposium focused on 'which structures diffract and how', including analysis of periodic, aperiodic, quasiperiodic and other structures. U. Grimm (UK) gave a general survey of aperiodic structures, their spectra and some ordered structures beyond pure-point (Bragg) diffracting crystals, such as the squiral tiling. N. Strungaru (Canada) discussed the concept of almost periodicity for measures and its connection to Meyer sets. 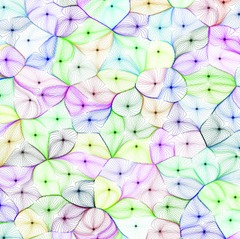 Robert Moody's slide showing the basins of attraction around the zeros of a Gaussian analytic function. 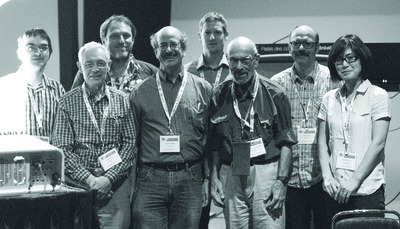 R. Moody (Canada) presented a form of random process in the (complex) plane arising as the set of zeros of Gaussian analytic functions and its connection to tilings and diffraction. D. Jüstel (Germany) suggested a novel form of radiation suitable for structural analysis of nanotubes, fullerenes and similar entities. S. Ravy (France) showed that coherent diffraction produces speckle patterns revealing higher order correlations undetectable by pure-point (Bragg) diffraction. As a paradigmatic example he quoted the Golay-Rudin-Shapiro sequence. L. Sadun (USA) discussed the relationship between the diffraction spectrum of a point set and the dynamical spectrum of an associated dynamical system. He also constructed a pure-point diffractive set with finite local complexity that is not a Meyer set – a counterexample to a conjecture of Lagarias