The opening of the Meeting: Ivan Leban and Stanko Popovic.

The 18th Croatian-Slovenian Crystallographic Meeting featured 5 plenary lectures and 37 oral contributions, and was attended by 108 crystallographers from 14 countries. From Kari Rissanen (Jyvaskyla, Finland) we heard about exciting research in supramolecular chemistry from Pacman to intermolecular interactions. Sasa Petricek (Ljubljana, Slovenia) surveyed a broad range of polyether complexes. Pance Naumov (Osaka, Japan) summarized development in the field of solid-state photochemistry including ultrafast photodiffraction. Fred Antson (York, UK) opened for us an exciting world of bacteriophages, molecular motors and DNA translocation. Pavo Dubcek (Zagreb, Croatia) described small-angle scattering from thin films. In other presentations, the attendees learned many ways to combine X-ray diffraction with EPR, Raman, IR, NMR, mass spectroscpoy, electron microscopy and thermal analysis. We were told that simple disorder is bad enough but that triple and quadruple disorder is far worse. We also learned about kidney stones, egg white coagulation, the subtle distinction between binuclear and dimeric, that the Gingko tree is from the Jurassic period, certain organic compounds are stable at 800°C, water and Mg2+ are isoelectronic species, and there are no N(phenyl)4+ species. Furthermore, I found out that 'semiquinones' in the hotel prevented me from sleeping, I should drink more coffee, and that the colour 'green' is unusual for radical political parties. 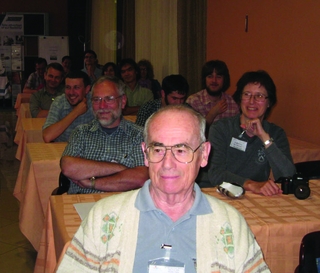 Participants listening to the plenary lecture; Karl Fischer in the first row.

We want to express appreciation to all members of the organizing committee. A. Visnjevac and Z. Stefanic created a wonderful website for the Croatian Crystallographic Assn, and processed all abstracts and registration with assistance from M. Cetina. This Meeting would not have been possible at all without help of the sponsors Renacon (Zagreb), Panalytical, SCAN (Preddvor), JEOL, Dectris (Baden), Hecus (Graz), Incoatec (Geesthacht), Skolska Knjiga (Zagreb), Oxford Diffraction (Yarnton), Hotel Turist (Varazdin), and the Ministry of Science, Education and Sport (Croatia). Further details describing the meeting and a photo album are available on the website.