Participants of the ECM-18 Conference gathered in front of the National Museum in Prague.

Sixty microsymposia and over 592 posters covered 46 different topics of crystallography at the Eighteenth European Crystallographic Meeting (Aug. 16-20, Prague, Czech Republic). Highlights of twenty-two of the sessions reported by session chairs are included here. Microsymposia topics are in bold print. 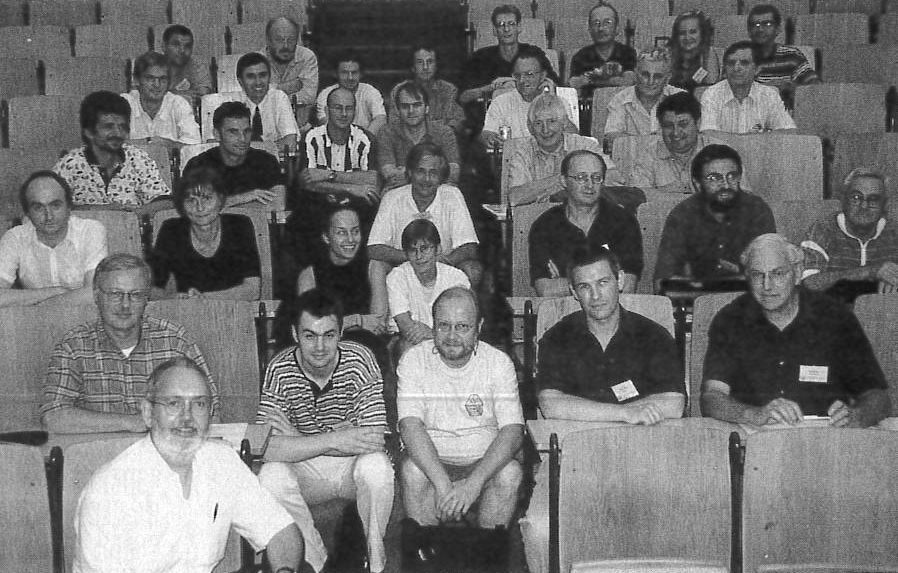 Speakers, organizers and audience in Phase and ready for Transition.

The Microsymposium on Mineralogical Crystallography (B1) began with a review lecture by R. Allmann (Germany) concerning the minerals in the Inorganic Structure Database. Other talks concerned the P-V-T equation of state of phengite-3T (G. Ferraris, Italy), deviations from ideal symmetry in wollastonite-like structures (J. Hybler, Czech Republic), and in alums and garnets (O. Frank-Kamenetskaya, Russia), and determination of the position and orientation of guest species in intercalating clay minerals (D. Janeba, Czech Republic). Finally, D. Gubareva (Russia) demonstrated that the water state in various vein quartz samples, as revealed and characterized by TEM and IRS, can be indicative of their ore-bearing capacity. 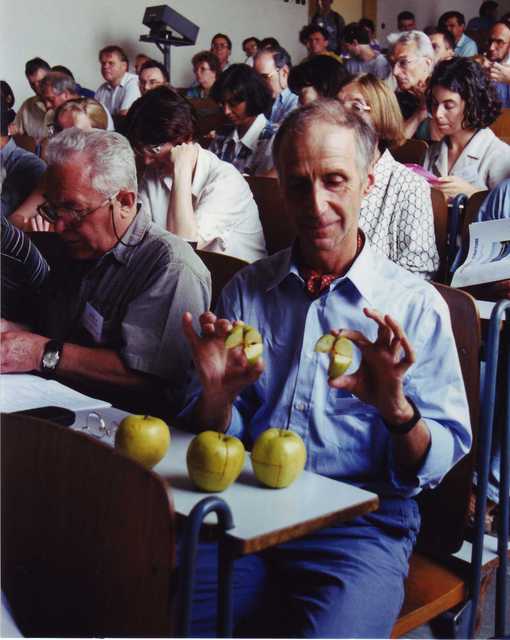 P. Laggner (Australia) opened the symposium on Small Angle Scattering (B6) with a survey of highly-promising SAX applications in synchrotron radiation and related research and analytical laboratory routines, and chemical industry production controls. This was followed by a discussion of the particle chord-length distribution function and the interpretation of particle scattering (W. Gille, Germany) and an account of SANS studies on "onion-type", three-layer block-copolymer micelles with promise for waste removal recovery (J. Plestil, Prague). The microstructure of Ni-based superalloys was the focus of the talk by P. Strunz (Prague). Talks on a new design for moderate pressure studies of liquid crystal phase transitions (M. Steinhart, Prague), and the influence of salts on serum albumin solution structure and aggregation (S. Mokeeva, Russia) rounded out the session.

Presentations in the symposium on Aperiodic Crystals (B7) included a new theoretical approach for structure factor calculation of aperiodic structures based on the reference lattice concept (J. Wolny, Krakow), a unified description of the crystal chemistry of a family of oxide pyroborates based on superspace group symmetry analysis (S. Schmid, Canberra), the advantages of the super space group approach to the description of complex layer structures (S. van Smaalen, Bayreuth), an electron diffraction study of intermetallic compounds (S. Lidin, Stockholm), and use of antiphase boundaries to describe structure with displacement waves propagating along specific crystallographic directions (A. Ustinov, Kiev). S.B. Abraham, (Beer-Scheba) used the cluster approach to redetermine the structure of quasicrystals of Mn80Si15Al5, previously studied in terms of the Amman-Beenker cluster. T. Janssen discussed the mission and objectives of the special interest group on aperiodic crystals of the European Crystallography Assn (http://www-xray.fzu.cz/sgip/aphome.html) .

Speakers, organizers and audience at the microsympoium on Phase Analysis.

The microsymposium on Systematics and Structure-Function Relationship in Organic Chemistry (C2) covered polymorphism, hydration, inclusion phenomena, and weak intra- and intermolecular interactions in condensed media. 200 years after Klaproth's discovery of two polymorphic forms of calcium carbonate (calcite and aragonite), F. Herbstein (Israel) presented examples of different forms of polymorphism, introduced a physical chemical scale for polymorphism and suggested a new nomenclature. F. J. J. Dijksma's (Scotland) studies of anhydrous brucine and its two hydrates, using DSC, TGA and X-ray powder diffraction, indicate that dehydration of the tetrahydrate proceeds via a dihydrate, that mediates the reversal of layers between tetrahydrate and anhydrous forms. Brucine is used to separate racemic mixtures by co-crystallization, and the hexapedal host compounds discussed by S.A. Bourne (South Africa) show molecular recognition properties with practical applications. A provocative opinion about the forces responsible for holding the organic world together, was presented by J.D. Dunitz (Switzerland). A crystal structure corresponds to an equilibrium at which attractive and repulsive forces must balance. Dunitz contends that at normal contact distances the dominant force is invariably repulsive and crystals are held together mainly by repulsions that oppose the disentanglement of interlocking molecules rather than by attractive forces. T. Borowiak (Poland) used data from the Cambridge Structural Database to demonstrate the importance of weak 1,4 - non-bonded interactions of the S...O and S...S type in stabilizing the geometry of 3,4'-diquinolinyl sulfides and M. Nieger (Germany) discussed the merit of using CCD detectors for collecting X-ray data for small molecules.

Transmission and signaling across membranes

The session on Transmission and Signaling Across Membranes (D1) began with a review of studies on the regulation of the oncogene ras by GAP proteins, resulting in an acceleration of its GTPase activity (A. Wittinghofer, Germany). The recent structure of the Ras-RasGAP complex shows how the "arginine finger" of GAP inserts into the switch II region of Ras and triggers a change which enhances GTP catalysis. S. Smerdon (UK) described complementary work on the regulation of the rho-family small G-proteins. The work of both groups has enhanced understanding on the activation mechanism of Ras and Ras related proteins, whose cancer causing forms are responsible for a significant fraction of human tumors. E. Baraldi (Germany) described a complex structure that causes X-linked immunodeficiency in humans. O. Mayans (Germany) described the autoinhibited form of the serine kinase of the giant muscle protein titin which revealed blockage of the catalytic aspartate, common to all known protein kinases, by a tyrosine not from the activation segment. The structure revealed a two-step activation mechanism with binding of Ca2+ and calmodulin and specific phosphorylation of the critical tyrosine. These molecules are important targets for the design of antiviral drugs. R. Engh (Germany) described inhibitors for cAMP dependent protein kinase, and H.J. Snijder (The Netherlands) presented the first structure of is an integrated membrane phospholipase. The 12 strand-b-barrel of this protein is reminiscent of porins which have 16 or more strands. The audience was fascinated to see how biology has transferred the same catalytic activity into a completely different protein context.

The microsymposium on DNA/RNA Structure (D2) had contributions from the most active areas in this rapidly-growing field. Z. Shakked (Israel) described DNA sequences involved in protein recognition, including conserved and flanking sequences in the binding site of the E2 papillomavirus protein. She showed how knowledge of native DNAs is revealing information on their ability to be perturbed by protein binding. Other talks described the remarkable structure of the sequence d(GCGAAAGCT), which forms a duplex with the central run of adenines formed into a zipper-like stack of bases, flanked by GA mismatches (B. Shepard, France), progress on the structure of 5SRNA (C. Betzel, Germany), and major-groove complexes involving several intercalating agents in current clinical trial (C. Cardin, UK). G. Leonard (France) described the second DNA-RNA hybrid crystal structure, in which alternation of the backbone in the RNA strand is in striking contrast to a model proposed from NMR studies, emphasising the need for more structural information. B. Luisi (UK) presented a data-base approach to the analysis of amine-amine close contacts in the major groove of oligonucleotide structures with high base-pair propeller twists. 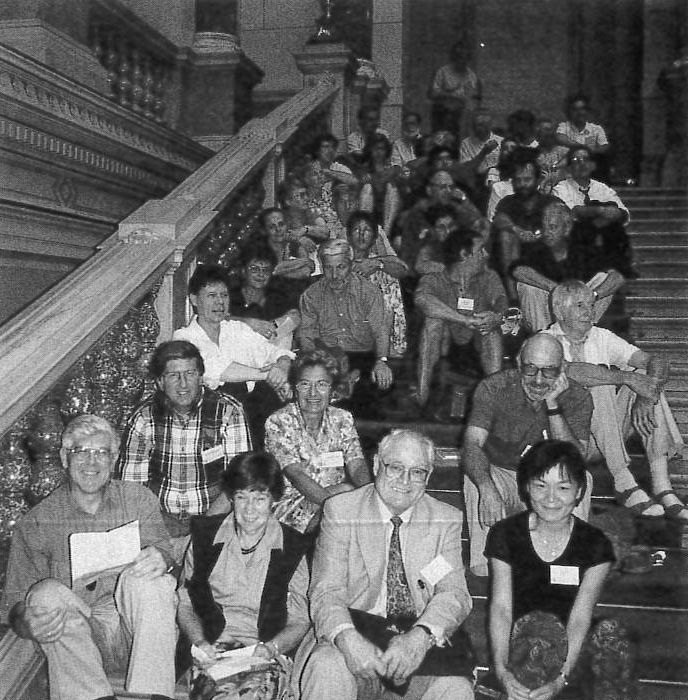 ECM-18 participants at the chamber music concert at the National Museum.

Presentations in the Immune Recognition (D6) symposium concerned acquired immune response, innate immune responses and signal transduction in lymphocytes. The structure of the human Bactericidal/Permeability Increasing Protein that neutralises inflammatory response, revealed bound phosphatidylcholine, suggesting its mode of action (L. Beamer, USA). A Fab antibody complex explained the relative difference in hydrolysis rates of esteres (B. Gigant, France), and the antigenic determinants of birch tree pollen, showed the epitope to be one of three determinants found in homologous tree pollen allergens (M. Gajhede, Denmark). Camelid antibodies present a curiosity among immunoglobulin structures since they are composed of heavy chains only. In the structure of the complex formed between the VH domain of a camelid antibody and lysozyme, the unusual arrangement of CDR1 and CDR3 creates an antigen-binding site that could readily enter the substrate-binding site of lysozyme (L. Wyns, Brussel). The combined use of X-ray crystallography and electron microscopy was discussed by E. Hewat (France) and illustrations of how neutralising anti-viral antibodies can function either by blocking the host receptor-binding site (Foot and Mouth Disease Virus) or by impairment of dissociation of the virus (Rhinovirus) were presented. D. Housset (France) described a new fold for the Vb domain in the structure of a Fv fragment of a T cell receptor. K. Fütterer (USA) described how the conformational flexibility and structural independence of the two SH2 domains of a protein kinase could account for the activity of the enzyme in several different immune signal transduction pathways.

P. Lindley (France) reviewed the importance of Metalloprotein (D8) photosynthesis, oxydative phosphorylation and nitrogen fixation and the power of diffraction and spectroscopic techniques to investigate the chemistry of these important metal centres. D. Garner (UK) also stressed the importance of high resolution macromolecular crystallography in studying metal centres essential for normal growth and development and introduced the concept of the Bond Valence Sum rule and a distortion theorem to assist in determining details of the metal coordination. Other presentations described the mechanism of action of a complex of dimethylsulphoxide (DMSO) with an oxotransferase containing a molybdopterin cofactor (S. Bailey, UK), hydrogen metabolising enzymes with [Ni-Fe] centres responsible for base-assisted heterolytic cleavage of hydrogen molecule (M. Frey, Grenoble), structures of a cytochrome c6 and a dimeric cytochrome c3 (C. Frazão, Portugal), a catalytic mechanism based on structural and kinetic data on vanadium halo-peroxidases (A. Messerschmidt, Munich), and calcium dependence of the complex formation between the S100 proteins and the annexins (S. Réty, France).

Structure and function in molecular biology

S. Neidle (UK) began the session on Structure and Function in Molecular Biology (E3) with a review of DNA structures including quadruplexes with potential applications in cancer therapy. Other talks concerned the classification of DNA sequences according to curvature characteristics and the influence of DNA flexibility on gene regulation, packing and replication (S. Pongor, Trieste), studies of the solvation of DNA showing that water and cations that bind in well defined sites may contribute to specificity of DNA interactions with gene regulating proteins (B. Schneider, Prague), evidence of ligand induced conformational change in dihydrofolate reductase, useful for drug design (V. Cody, Buffalo), the coordination geometry of 38 internal water molecules in acetylcholinesterase conserved in four crystal structures of different inhibitor complexes (T. Steiner, Rehovolt), the use of the conjugate peak refinement method to look into calcium-induced conformational transition of domain III in annexin V (J. Sopkova, Orsay) and comparative conformational analysis and catalysis in a fumarase family of lyases (V. Zaitsev, Daresbury). The conference proceedings are available at http://krystal.karlov.mff.cuni.cz/ecm/. The full text of the principal contributions will be available in book form in 1999.

The session on Ab-initio Methods for Structure Determination (E5) was focused on the macromolecular field. The programs Shake and Bake (Weeks, Xu, Miller and Hauptman, US) and Half Baked (Uson and Sheldrick, Germany) reveal the power of reciprocal space direct methods when combined with real space filtering to solve structures with as many as 1000 independent non-H atoms (provided that data to 1.1-1.2 Å resolution is available). The Automated Refinement Procedure (Lamzin, Morris and Perrakis, EMBL) is based on iterative interpretation and refinement using an atomic model and 2 Å resolution data where the original phase information is limited. C. Gilmore and W. Dong (UK) efficiently samples phase space using error-correcting codes and ranking manageable numbers of phase sets with maximum likelihood. At very low resolution, Lunin (Russia) models a small number of atoms to reduce the number of phase sets to be analyzed. Application of the Few Atoms Model algorithm to the T50S ribosomal particle, resulted in images which have a high map correlation with corresponding EM images. New theoretical approaches to the phase problem presented by C. Giacovazzo (Italy), were based upon phase relationships for structure factors with rational indices.