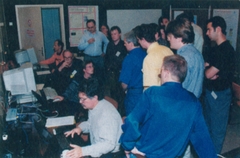 Els Homan explains the integrated acquisition and pre-processing for the DUBBLE beamline.
The aims of the canSAS meetings are to promote and simplify the sharing of SAS data analysis methods. The third workshop held at the ILL in May, 2001 attracted 30 participants. The workshop organized by the ILL, EMBL, ESRF and the DUBBLE-CRG brought together practitioners at the leading edge of data analysis and computer scientists working on advanced data storage techniques.

J. Barnes (NIST) stressed the need to conserve a maximum number of parameters (meta-data) including error estimates. The Neutron and X-ray communities are promoting NeXus, a self-describing data format, based on the NCSA Hierarchical Data Format (HDF). To allow the use of simple ASCII files, the sasCIF format, an extension of the Crystallographic Information File (CIF) was written by D. Svergun and M. Malfois (DUBBLE-CRG) who reported recent modifications. S. King (ISIS) identified additional meta-data required for Time of Flight (TOF) neutron data. Marc’s document matching sasCIF names and NeXus meta-data names was well received. R. Ghosh (ILL) described efforts to introduce XML, a rapidly developing standard for data interchange, as a wrapper for the multifarious file formats presently in use. There was general recognition that XML might well offer procedures for progressively introducing a WWW based definition of 1D data and meta-data. L. Gilbertson (ILL) demonstrated how a short Python script offered easy access to XML files, driven from a simple GUI. E. Pourmel (NCSA) described the Hierarchical Data File developed at the NCSA. Version 4 had been adopted by the NeXus development group for storage of raw data. The demonstrations of browsers with editing features, H5-View (E. Pourmel), and good graphics (E. Boucher, APS) convinced those present that HDF-5 should be adopted for complex data storage. U. Filge (PSI) described a new version of NeXus based on HDF-5.

P. Besecke (ESRF) described the problems encountered in merging SAXS and WAXS data and of the distortions arising as the WAXS detector is rotated about the sample. Since new SANS instruments are likely to be on pulsed sources, dealing with TOFSANS is of major interest. E. Litvinenko (JINR) demonstrated how PV-WAVE displays and evaluates TOF-SANS data. This is essential for examining graphically various data quality indicators. R. Hjelm (LANSCE) showed how the data quality could be defined before performing final data reduction of TOF-SANS. He had chosen HDF/NeXus as a data format since it offered the best means for storing the complex raw data.

The packages which have been used for SAS analysis include PV-WAVE, IDL, MATLAB, IGOR, OCTAVE, as well as maintained programs such as FIT2D. Common dependencies on X-window (Unix) or PC-Windows have been resolved, and the user sees the same interface on either type of platform. The primary attraction in using packages is that the aspect of computer platform independence is resolved by the package authors.

A. Munter (NIST) described the system at NIST which is based on IGOR, but expressed reluctant to continue development. C. Dewhurst (ILL) demonstrated GRASP, based on MATLAB. This includes many automatic features for matching data taken in different instrument configurations, as well as 2D fitting etc. The easy ability to compile and freely distribute MATLAB executables is an exception for commercial packages. E. Homan (EMBL) demonstrated the integrated control and treatment software developed using IDL for the DUBBLE-CRG SAXS-WAXS beamline at the ESRF. Andy Hammersley (ESRF) showed that his FIT2D includes calibration corrections needed for high precision work. Although based on a GUI, he wonders whether such products could benefit from a macro language (perhaps Python based) for repetitive operations. M. Rodman, (SRS, Daresbury) described GraphApp, a GUI C library, which enables applications to be compiled either on PC-Windows, or X-window. This allows stand-alone executables to be created.

Problems of measuring weak signals were raised by A. Rennie (King’s College, London). When backgrounds are high the propagation of errors is needed in assessing final results. With complex samples such as fibres, the SAS diffraction geometry requires correction before interpretation of the 2D SANS diffraction patterns. He reported success in matching results at different facilities using distinct program suites. A new challenge was posed by high-fluxes, where on-line analysis had to be developed to follow complex measurements.

The activists in Grenoble, Didcot and Washington proposed continued exchange of examples of XML data files; all agreed to look at the possibilities of using HDF-5 utilities to construct sample data files of complex measurements as examples to display in Venice at SAS-2002.

There was general agreement that canSAS should serve as a forum for debating analysis techniques and disseminating information on programs and should create a website dedicated to these aims.