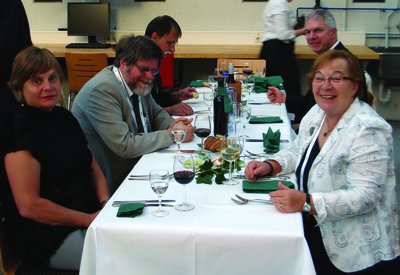 COSPAR was established in 1958 by the International Council of Scientific Unions (now the International Council for Science), with the main objective of promoting international collaboration on various levels of research in space. Emphasis has always been on the exchange of results, information and opinions as the development of world standards for the space environment, and its protection, requires cooperation at both national and international levels. With this in mind it should be stressed that IUCr representation at the COSPAR General Assembly increases our visibility as well as providing us an opportunity to monitor emerging trends and to see future changes in this global area of research and to position our own approach accordingly.

The majority of COSPAR activities are devoted to space topics (such as astronomy, space travel and exploration or climate research). The most interesting for the IUCr division of COSPAR is the Scientific Commission on Materials Science in Space (MSS, Commission G) which deals with scientific experiments on materials performed in reduced gravity environments. Different experiments on the growth of crystals and dendrites in microgravity have been part of these programs. Currently the stress is more on combustion and biotechnology. The MSS Commission reviews fundamental theoretical and experimental approaches, helping to understand emerging fields and recommends promising avenues for future research. It also coordinates the exchange of information on scientific subjects. The MSS Commission is chaired by V. Shevtsova (Belgium), with vice-chairs being S. Amiroudine (France) and S. Yoda (Japan). The presentations dealt mostly with microgravity experiments conducted in drop towers, parabolic flights, photon satellites and on the International Space Station. Four half-day symposia reported on effects of gravity on physico-chemical processes. The local Organizing Committee, headed by Hans J. Rath, did an excellent job. The official statistics are as follows: final number of participants: 4836, which included 586 students and 1000 local visitors. Overall, 64 countries were represented and 4503 abstracts were received.

Outreach events included: a public lecture by the scientific director of the MPI for Plasma Physics, providing insight into modern astrophysical research on cosmological objects and phenomena; a Mars exhibition at the Bremen town hall; an art exhibition: Genesis and Dreams; and Bremen’s 'Children reach for the stars' exhibition. The financial situation of COSPAR is satisfactory and recommendations were made to hold a multidisciplinary general symposium every other year starting in July 2013. The symposium will focus on training and education with special activities dedicated to teachers, students, young professionals and the general public.

'Advances in Space Research' (ASR), an official journal of COSPAR, covers all areas of space research including – but not limited to – space studies of the earth’s surface, meteorology, climate, fundamental physics in space, materials physics in space, space debris, weather and earth observation of space phenomena. The journal home page is http://ees.elsevier.com/asr.