Twenty crystallographers, representing 15 nationalities, attended the IUCr-UNESCO OpenFactory, which was sponsored and organized by STOE, DECTRIS and Xenocs, and took place as part of IYCr2014.

The delegates received ten days of intensive training from STOE, DECTRIS and Xenocs staff and guest scientists in cooperation with the IUCr. The opening ceremony was held in Darmstadt on September 10th, where STOE offered a warm welcome to the participants. This was followed by the first lecture, in which DECTRIS took the delegates on an exciting journey through the instrumentation for X-ray analysis. From laboratory to synchrotron sources, advances in modern instrumentation were presented using several examples of difficult structures, whose solution was possible only owing to the features of MYTHEN and PILATUS detectors.

In Grenoble, after a fascinating introduction to the history of crystallography and today's challenges by Jean-Louis Hodeau, Directeur de Recherche at Institut Neel-CNRS and member of the IUCr Commission on Synchrotron and XFEL Radiation, the delegates received theoretical and practical training on small-angle X-ray scattering. Four different workshops were organized at Xenocs Headquarters so that the participants could get in-depth knowledge on Xenocs sources and optics, Xenocs SAXS/WAXS systems, and data treatment software, with experiments carried out on the Xeuss 2.0 SAXS/WAXS system. 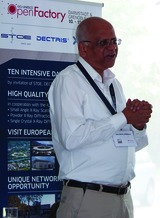 As a highlight, Gautam R. Desiraju, Immediate Past President of the IUCr, gave his premier speech on '100 years of Crystallography: Seen through 15 small-molecule crystal structures', in which he illustrated some of the most fascinating developments over a timespan of a century.

The positive feedback from the participants was overwhelming. Next to all the knowledge being shared, it has been impressive how strong ties have been built among the participants, connecting young crystallographers from across the world in the spirit of IYCr2014.