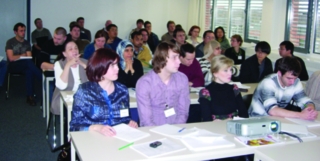 The participants during the lectures.
The 6th Workshop on the Theory and Methods of Structure Determination and Analysis of Incommensurately Modulated Structures and Composite Crystals was organized by Sander van Smaalen on behalf of the Aperiodic Crystals SIG of the German Crystallographic Assn (DGK) and the Laboratory of Crystallography of the U. of Bayreuth. The speakers were V. Petricek and M. Dusek (Prague, Czech Republic), L. Palatinus (Lausanne, Switzerland), N. Bolotina (Moscow, Russia), A. Schönleber and S. van Smaalen (Bayreuth).

Lectures on Aperiodic order in crystalline materials, Superspace description of modulated structures, Superspace symmetry and Diffraction by incommensurate structures provided an overview and introduced the fundamentals of the (3+d)-dimensional superspace approach as a mathematical tool for the description of crystal structures of incommensurately modulated compounds. Fourier methods in superspace and Modulation functions by the Maximum Entropy Method presented techniques for finding atomic modulation functions. Structure solution by Charge-Flipping described a method of ab initio direct structure determination in higher-dimensional superspace. Modulated structures of Lazurite minerals - a case study, Disorder and aperiodic order and Modulated molecular compounds described using the superspace approach for a unified and simplified description of complex superstructures, crystal-chemical aspects of aperiodic structures and potential problems and their solution during measurement and data collection.

In the afternoons participants practiced structure solution and refinement on their own desktop computers using programs such as JANA2006 (V. Petricek, M. Dusek and L. Palatinus, Prague) and SUPERFLIP (L. Palatinus and G. Chapuis, Lausanne) that had been installed on the computers in the Bayreuth U data centre. A script with selected examples of different levels of difficulty gave a step-by-step introduction to the procedure of structure analysis of aperiodic crystals. The questions and exercises in the script served as motivation for working out the various aspects of structure analysis in superspace. The lecturers served as tutors to discuss, help, advise and solve problems.

Participants and speakers of the 6th Workshop on Structural Analysis of Incommensurate Crystals.
The 31 participants from Europe, the USA and India work in inorganic and organic solid-state chemistry, solid-state physics, metallurgy, biochemistry, structural biology and in the pharmaceutical industry reflecting widespread interest in aperiodic crystals. The 7th Workshop is now scheduled for spring 2011. The DGK is acknowledged for their generous financial support. East-European scientists were supported by travel grants from the German Research Foundation (DFG).
Andreas Schönleber
Quick links