Engineering Crystallography: from Molecule to Crystal to Functional Form 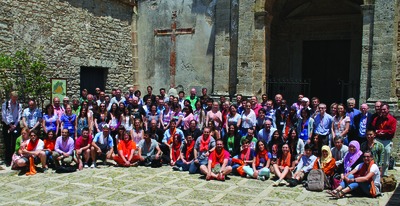 Participants at the 48th Crystallographic School in Erice, June 2015.

The 90 participants from 33 nations who attended the 48th Crystallographic School in Erice were selected from 170 applications. They came from universities (PhD students, postdoctoral and young researchers), and chemical and pharmaceutical companies. The course was supported by the IUCr, ECA and CCDC, as well as by private companies Dectris, Abbvie, Merck and PANalytical.

A typical day included a morning session with four lectures and an afternoon session with two lectures, tutorials, workshops or round-table discussions. The first day provided a complete overview plan for the course (Roberts). The opening talk (Docherty) presented the translation of molecule to crystal to product in the pharmaceutical sector. This was followed by lectures on supramolecular assembly and solid-form architecture (Aakeroy), and the link between the crystal structure and mechanical properties of organic materials (Malla-Reddy). In the afternoon the crystallization route map was introduced (Roberts) and the importance of supersaturation as the driving force for nucleation and growth was comprehensively covered (T. Hoorst). The influence of interfaces during the crystal growth process was elegantly captured (Ward).

In days 2 and 3 the concepts of morphology and chirality were introduced. The link between growth and habit was covered in detail (Roberts). The definition of molecular chirality and the importance of the resolution of chiral molecules were given in a series of lectures (Kuroda, Tamura, Coquerel). The theme of stability was introduced, focusing on chemical reactivity and crystal defects (Jones) and the physical stability of polymorphs and solvates (Griesser).

On days 5 and 6, Discrete and Finite Element Modelling (DEM/FEM) was introduced to show the connection between the particles formed in primary manufacturing and their possible impact on secondary processing (flow, mixing) (Wu). Other topics included solution and solid-state characterization (Kwokal), as well as co-crystal formation through grinding (Jones), solid-state and surface characterization (Feeder, Heng), and crystallization screening and process scale-up (Griesser and Nagy). Software tutorials (Mercury by the CCDC and Visual Habit from Leeds U.), and the Crystal 16 crystallization workflow (Avantium), an always popular feature of the Erice Schools, rounded off these sessions.

The final day consisted of an overview of analytical technology applied to crystallization and powders (Kwokal), and to crystal optical characterization (Kuroda), and the application of ultrasound to induce nucleation (Price). The formal teaching was concluded with the deconstruction of a product back to component parts and the impact of science of scale tools on product design (Docherty). The final afternoon was dedicated to panel discussions on all aspects of the course with seven of the speakers. Throughout the week students submitted questions so that the panel could address broad themes.

Over the course of the School about 70 posters were presented in two sessions. Six 15-minute oral presentations by young participants (selected from the poster abstracts) were included in the programme: Thomas Gee (U. of Southampton, UK), F. George (U. Catholique de Louvaine, Belgium), G. Lloyd (Heriot-Watt U., UK), M. Gryl (Jagiellonian U., Poland), A. Tilborg (U. of Namur, Belgium) and M. Viertelhaus (BASF SE, Germany).

On the afternoon of the last day several awards were presented. Parallel awards were given for each of the two poster sessions. First place awards went to S. Kennedy (Durham U., UK) and R. Drori (New York U., US); second place to F. Topić (U. of Jyväskylä., Finland) and I. Olson (New York U., US); third place awards to S. Modi (NIPER, India) and A. Klapwijk (U. of Bath, UK). The Lodovico Prize, acknowledging the most active student inside and outside the lecture hall, was given to Elena Meirzadeh (Weizman Inst. of Science, Israel), with special mention going to Marlena Gryl (Jagiellonian U., Poland).

Participants completed a survey on the quality of the Course. Their responses indicate that a similar meeting should be held at least in 3-4 years' time, and that the course was successful in most of its objectives (score 85/100).