The AsCA meeting was attended by 266 crystallographers from 13 regional member countries (Australia, Bangladesh, China, India, Indonesia, Japan, Korea, Malaysia, New Zealand, Singapore, Taiwan, Thailand and Vietnam), 19 people from Europe and 3 from the US.

Y. Ohashi, president of the Japanese Crystallographic Society, gave a plenary lecture on Real-Time in situ Observation of Chemical Reactions including photoracemizations, reversible structural changes, transformations, and a description of a new online two-dimensional detector which can collect a three-dimensional dataset in less than 1 msec using synchrotron radiation allowing analysis of excited states of molecules.

In his plenary lecture on Direct Determination of X-Ray Reflection Phases Using Multiple Diffraction: Theory & Experiment, C.-L. Chang (Taiwan) presented the principles of n-beam diffraction and showed how triplet phases can be determined experimentally. At least one thousand triplets were measured in the examples he gave, indicating that the method can be successfully applied to macromolecular structures. Chang indicated that the method could be extended to mosaic crystals.

In a plenary lecture titled Drug Design Against a Shifting Target, P. Colman (Australia) described the structure based design of inhibitors of the influenza virus neuraminidase. A general strategy for drug design when the target has a high mutation frequency was proposed.

The Microsymposim on Diffraction Theory and Technology included a presentation on "Dynamical Diffraction at Grazing Incidence" in which A. Authier (France) described a new derivation of the dispersion surface involved in dynamical diffraction and solution of third-degree equation. A.Y. Nikulin, (Australia) discussed "Uniqueness of the Complex Diffraction Amplitudes in X-ray Bragg Diffraction" and how physical considerations permit unique solutions for structure-factor profiles. Other presentations included "Computer Simulation as a Tool for the Analysis of Diffuse Scattering", (T.R. Welberry, Australia), "Correlated Interface Structures in Superlattices Determined by X-ray Scattering", (Y. Yamaguchi, Tokyo) and an optical microscope and X-ray powder phase diffraction phase analysis of niobium doped hexagonal potassium tungsten bronzes (A. Hussain, Bangladesh). 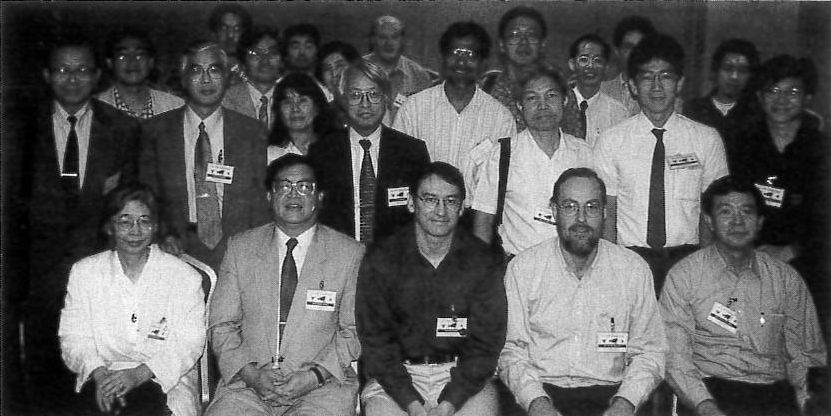 P. Reynolds (Australia) began the microsymposium on Neutron Diffraction with a lucid account of the application of high resolution powder diffraction (using IRIS at the ISIS facility) to the study of magnetic diffraction involving paramagnetic materials with and without applied magnetic field, and magnetically ordered materials above and below a magnetic phase transition. These measurements can provide information on structure and spin distribution comparable with that derived from polarised neutron measurements on single crystals. Y. Fujii (Japan) reported a study of a'-NaV2O5, a truly fascinating material that contains parallel linear chains of V4+ (S=1/2) and V5+ (S=0) ions in an alternating arrangement. There is a spin-Peierls transition at 35 K, below which there is a doubling of the lattice parameter along the V4+ chains. Inelastic neutron scattering was used to confirm that the direction of pairing is along the chains, and to estimate the binding energy of the pair as 10 meV. C. Wilson (UK), described neutron structural studies at several temperatures to gain insight into the librations of terminal methyl groups in paracetamol, the location and possible disorder of hydrogen in short hydrogen bonds, and proton disorder in substituted benzoic acids. He described the effect of temperature upon hydrogen atom geometry including libration of a methyl group and migration of a hydrogen atom in a short hydrogen bond. The latter showed evidence of reverse migration at higher temperatures. The C-H value extropated to a point without torsinal motion of the methyl (-50°K) was 1.186Å. Chick's overheads can be viewed at http://www.isis.rl.ac.uk/crystallography/wilson/asca.htm. Y. Karasawa-Haga (Japan) spoke on recent developments in the use of image plates in neutron diffraction including collection of a refinable data set from a hen egg-white lysozome collected at ILL in only ten days. Applications in powder diffraction, residual stress measurement and the evaluation of neutron beams were also described. C.J. Howard (Australia) illustrated the use of neutron powder diffraction for the accurate determination of oxygen positions in metal oxides with examples of phase transitions in zirconia and perovksites. In his concluding remarks, Chairman Fujii noted recent and planned development of neutron sources in the Asian region, including new reactors in Australia and China, and a powerful new spallation source in Japan.

A highlight of the microsymposium on Aperiodic Structures and Incommensurate Phases was a paper on "Structure Studies of Quasicrystals by Convergent-Beam Electron Diffraction and High-Angle Annular Dark-Fields (K. Saitoh, K. Tsuda, M. Tanaka and A.P. Tsai). The paper describes clearly revealed transition metal positions in decagonal quasicrystals. The resolution is nearly equal to that of the usual high-resolution transmission electron microscope but the interpretation of the image is much easier with this powerful new technique.

The Macromolecular microsymposium included a review of recent results on proline specific peptidases. M. Geiss (Australia) described the remarkable degree of selectivity and specificity among distinctly different peptidases that depend upon the precise sequence surrounding the proline or prolines at the site of cleavage. M.R.N. Murthy (India) gave an illuminating discussion of the interplay between symmetry relationships and sterochemical features of the subunits of a mottle virus. He showed that N-terminal arms extended from a pentamer play an important role in the viral capsid assembly. Y. Kai (Japan) described the structure of phosphoenolpyruvate carboxylase from E. coli, a homotetramer consisting of 883-residue subunits. In addition to the (b/a)q barrel, each subunit has 33 more a-helices. T. Baker (New Zealand) described the structure of rabbit hemopeptin, a heme binding protein. The complex structure, composed of two homologeous domains each containing four sequences repeats, belongs to a growing family of b/a propellers having 6,7 and 8 blades and a narrow ion containing channel at the hub. The structure revealed a heme group bound at an unexpected location offering new insights and raising new questions about the mechanism by which the protein sequesters toxic heme groups.

The structure of a complex between the DNA cleaving colicin E7 and its inhibitor IM7 revealed a new fold of the inhibitor and colin E7 folding undisturbed from the negative structure. The predicted DNA binding site of the colicin E7 is far from the extensive interface between the toxin and the inhibitor. This feature raises questions about previous predictions or the significance of the crystal complex (H.S. Yuan, Taiwan). 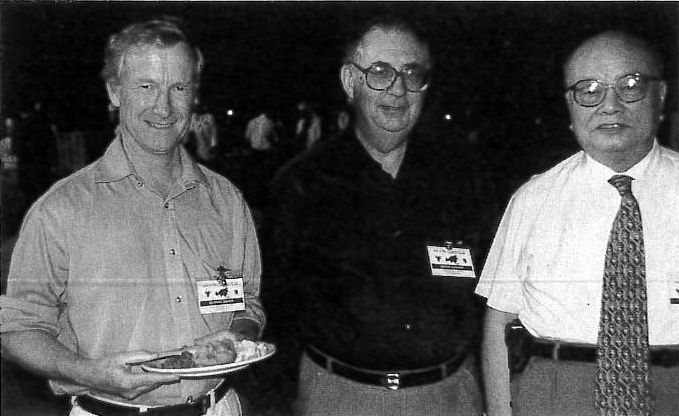 Ted Baker, André Authier, and You-Qi Tang at the opening night reception in the rain at the AsCA.

B. Kobe (Australia) presented the structure of phenylalanine hydroxylase, mutations of which cause the disease phenylketonuria. The structures in both the dephosphorylated and phosphorylated states were determined to understand how the activity is regulated. Other symposium presentations included: structural studies of deoxycytidylate hydroxymethylase from bacteriophage T4 (S.W. Suh, Korea), a human immunoglobulin G receptor (K.F. Maxwell, Australia), a 20 S proteasome from bovine liver (M. Unno, Japan), conformational changes in methionine residues upon the electron and protron transfer processed by cytochrome c oxidase from bovine heart (M. Yao, Japan), and sheep liver class I aldehyde dehydrogenase, in which comparison with class II enzyme explains the substrate specificity differences (H.M. Baker, Australia). T. Hori (Japan) discussed the temperature jump-Laue method and described the denaturation studies on a chimeric 3-isopropylmalate dehydrogenase. W.L. Duax (USA) gave a talk on the structures of a Cs+ complex of gramicidin D and an NH4+ complex of a killer toxin KP6alpha. The coordination of the cesium ion is achieved by interaction with the p orbitals of the carbonyls in gramicidin D.