Crystallography in a castle 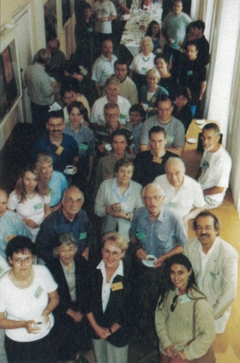 Participants at the 11th SOCC in August 2001.
An exquisite baroque castle in Rydzyna, Poland is the site of the triennial Int’l Organic Crystal Chemistry Symposia (SOCC). For the 11th SOCC, held in late August, 2001, the welcoming hosts were, as ever, the Chemistry staff of AMU, Posnan. This time chaired by T. Bonowiak. Polymorphism and intermolecular interactions were recurring themes in talks encompassing phase transformations, supramolecular structures, inclusion compounds and structure prediction, while many of the posters dealt with organic structures relevant to biological activity. The 70 participants came from a dozen countries, and IUCr support enabled young scientists from Moldava, Poland and Russia to present posters.

J. Karle, Honorary Chairman opened the Symposium with a retrospective view of attempts to explain the adhesion of molecules to form crystals, with a look forward to the computation of intermolecular interaction and packing energies in crystals in the 21st century. Later, D. Hofmann extended his systematic approach to structure prediction, utilizing the Flex Cryst program and the database of known structures. F. Allen noted that some so-called weak interactions such as non-H-mediated ones between C=O and C=N groups can approach hydrogen-bonding energies. Other accounts of the systematics of crystal structures came from V. Gorovov on energy calculations for hydrocarbons, V. Belsky on structural types of metal-halide crown-ether complexes, and L. Kuleshova on the high proportion of hydroxy compounds that form polysystem crystals in which molecules occupy more than one set of crystallographically independent positions.

Following an explanation by W. Hosseini of molecular tectonics, the structural design of supramolecular network formation, W. Jones described co-crystals in which organic guest molecules are intercolated in solid inorganic layers (his references to robust hosts, charged guests, and inserting guests between positively charges sheets were later quoted out of context). U. Rychlewska showed, with ab int calculations, how dramatically molecule conformation can be influenced by the guest molecules in an inclusion compound. D. Braga reported that the organometallic dicarboxylic acid [(N5-C5HK COOH)2 CoIII] is a versatile building block and forms crystalline halides and the co-crystal chloride monohydrate. W. Jankowski demonstrated the wide range of interaction in supramolecular structures.

After an introduction and illustration by C. Lecomte of the topological analysis of the charge density derived from synchrotron data, F. Larsen concentrated on low-temperature measurements to study short hydrogen bonds, M. Kubicki characterized weak intermolecular C-H hydrogen bonds by typological analysis, and A. Korlyukov discussed high-resolution X-ray diffraction for investigating hypervalency. H. Birkedal’s study of polymorphism and stacking disorder recognized the presence of distant but closely similar monoclinic and hexagonal phases and interpreted diffuse scattering, as heavily faulted layer scattering. J. Meinnel utilized diffraction and inelastic scattering of neutron in his engagingly illustrated account of hindered rotation and tunneling of CH3/CD3. Since circular birefringence has not normally been feasible in crystals in the presence of dominant linear birefringence, little is know about the orientational dependence of optical rotation in molecules. B. Kahr measured optical gyration in a low-symmetry MPH4 isostructural series with an increasing polorization [M=C, Si, Ge, Si, Pb] and he showed beautiful illustrations of an investigation of the absorption energetics of inclusion overgrowth of dyes on facets of potassium sulfate crystals. M. Gdaniec utilized cholic acid and deoxychilic acid as chiral host materials wherein circular dichroism can be generated from organic guest molecular that are otherwise optically inactive and the helicity chromophones could be correlated with the cotton effect.

Accounts of novel organic materials included reports of polymorphism in substituted pyridinium salts with potentially non-linear optical properties by T. Timofeeva, of ferromagnetic and antiferromagnetic systems by F. Iwnsoki, and of transitions between crystalline and rotator phases of long-chain (n=17-24) pure alkanes and their solid solutions and mixtures up to n=37 by S. Chazhengina.

W. Duax recounted the novel interactions of ions of the alternating d/l peptide gramicidin and water with the peptide framework in 25 Å long single file channels and coordination of cations with π-orbitals of C=O groups and peptide bonds in the channel wall. I. Karle described the design and self-assembly of hybrid peptides to form pores and tubules. For peptides with as many as 20 CH2 groups in a chain, lipophic guest molecules as large as pyrene and perylene can be solubilized within hydrophobic cavities.

Cultured social activities (including a bonfire with beer and songs) within the castle and grounds balanced a full scientific program. As with recent SOCC, selected papers are to be published in a special issue of J. Molecular Structure.