Scientific conferences do not have to be boring!

On May 22, 2013, the Center for Biocrystallographic Research at the Inst. of Bioorganic Chemistry, Polish Academy of Sciences in Poznan, Poland, organized a conference on 'Structural Biology of Plants and Microbes', where the international PhD students supported by the Foundation for Polish Science presented the results of their research. In addition, there was a general poster session and lectures by invited speakers, including Zbyszek Dauter (ANL, Chicago, USA) who tried to 'apply common sense to PDB structures', Alex Wlodawer (NCI, Frederick, USA), who spoke about anti-cancer plant proteins, and Matthias Bochtler (IIMCB, Warsaw, Poland), who dissected the consequences of DNA methylation.

Among the students' presentations there were real crystallographic gems, for example a crystal structure with 28 independent protein molecules (Joanna Sliwiak), an example of enzyme optimization using structures from extremophiles as the tuning fork (Piotr Malecki), structural genomics of silkworm hemolymph with a bag of surprises (Agnieszka Pietrzyk), or structural biology of symbiotic nitrogen fixation from the point of view of phytohormone signaling (Milosz Ruszkowski) and symbiont enzymology (Tomasz Manszewski). There were attractive prizes for the best student talk (Milosz Ruszkowski) and poster (Patrycja Plewka and Stanislaw Wosicki). 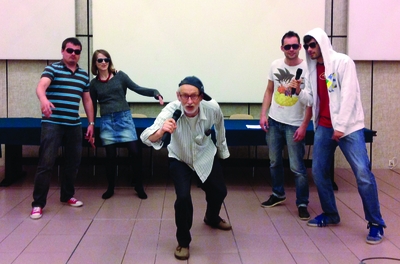 All this could sound like a dry recounting of the agenda of yet another conference but there was a difference. The scientific program was elegantly blended with a number of attractive events. During an intermission, there was a concert by the Institute's choir performing a collection of classical and adapted choral music. Just after the scientific talks, there was a short 'Lecture on crystallography in the form of rap'. This serious/hilarious lecture was recited to bursts of laughter from the audience by a band of students together with their professor.

After the lecture, Dr Wlodawer (NCI Mentor of Merit) presented his thoughts about mentoring in science. The talk was followed by a short general discussion, with the conclusions that there is no one, 'the best', way of student mentoring, that the ability to listen to each other builds a successful mentee-mentor relation, and that proper selection of mentees is also important.

As an aperitif before the conference dinner, Joanna Sliwiak opened a bottle of champagne to celebrate her structure with 28 protein molecules in the asymmetric unit. Instead of the usual toasts, the dinner featured a long recital of crystallographic limericks composed by two (in)famous 'poets', Dr Zbyszek Dauter and Prof. Mariusz Jaskolski. At its height, the recital threatened to become a fierce duel. Fortunately no blood was shed, and the last poem, recited jointly, ended with a jolly and encouraging 'Long Live Crystallography!'. It was a memorable conference, indeed.