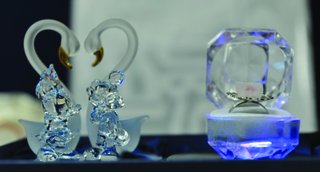 Crystals are one of the most beautiful objects found in nature. The wonderful colours, well-developed faces, sharp edges and artistic forms of crystals of naturally occurring minerals have given rise to their use in precious jewelry and as art objects. Growing large and aesthetically pleasing single crystals is an art that requires skills and patience. Crystal growing can also be a lot of fun and provide an opportunity to bring out one's creativity. Finally, crystal growing activities can get young people interested in the science of crystallography.

The Dept. of Chemistry at the National U. of Singapore (NUS) held the 10th Singapore National Crystal Growing Challenge Competition in October 2012 at the main building of Faculty of Science, NUS. This popular competition, which began as an annual event in 1997, has been held biennially since 2000. This year 118 teams from 47 Secondary, Junior College and Polytechnics in Singapore participated in the competition.

Prize winners from Open Category with the guest of honour Professor Leo Tan, President of Singapore National Academy of Science (SNAS) and Director of Special Projects, NUS (4th from Right).

There were three categories for this year's competition, Junior (Secondary school students), Senior (Junior College and Polytechnic students) and Open levels. For each category, there were first, second, third and two meritorious prizes carrying cash awards of $400, 300, 200 and 50 (×2), respectively, in addition to trophies for the top three winners. Junior level students grew colored sugar crystals. Senior level students grew Rochelle salt, Na,K(Tartrate)·4H2O. Open level students were challenged to grow the longest single crystal they could to exercise their creativity, individuality and scientific knowledge.

The students displayed their posters and crystals in the morning of October 6. The award ceremony, held that afternoon, was attended by more than 300 guests, students and teachers. Jagadese J. Vittal, the founder of the competition, described its history since its inception in 1997. The guest speaker, Ms Sadow Tanja, Dean of the Jewellery Design and Management International School (JDMIS) in Singapore, discussed natural gems and minerals and how they differ from the synthetically made crystals.

The guest of honor, Leo Tan, President of Singapore National Academy of Science (SNAS) and Director of Special Projects, presented tokens of appreciation to the judges and the guest speaker and presented prizes to the winners of all the categories including the best display and creativity, and the biggest single crystal. This year's competition was sponsored by Bruker Singapore Pte Ltd, the Material Research Society of Singapore (MRS-S) and World Scientific Publishing, Singapore. In fact, Bruker Singapore Pte Ltd has been a constant sponsor since this event began in 1997. The details of this challenge are available at the website: www.chemistry.nus.edu.sg/events/CommunityOutreach/ncgc/announce.htm.

The next crystal growing competition in Singapore will be held as a special event in conjunction with the International Year of Crystallography in 2014.