Minutes of the AsCA Council Meeting 2010 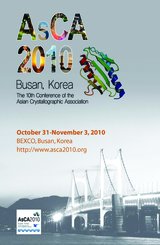 The IUCr Executive Committee (EC) held its annual meeting in Busan, South Korea, prior to AsCA 2010. Sine Larsen presented a report from the EC outlining the history and management of the regional associates to the IUCr (ACA, ECA, and AsCA). She discussed the actions taken at the EC meeting, and a proposal for an International Year of Crystallography (IYCr) in 2013. She also presented an update on the IUCr Congress and General Assembly to be held in Madrid in August 2011. The IUCr is currently seeking support from the UN (through UNESCO) for the IYCr. The IYCr will involve the development of a website, educational materials, exhibits and activities, and the participation of the Regional Affiliates, National Adhering bodies, IUCr Commissions and crystallographic resources including synchrotron and neutron radiation centers and crystallographic databases. An open competition will be announced shortly for the design of an official logo for the IYCr.

Organizing chair Se Won Suh outlined the statistics of AsCA 2010. There were 415 presentations (83 oral and 332 poster). The distribution of presentations was: 155 biological, 156 non-biological, 90 technology, and 7 others. Attendance was the highest yet for an AsCA meeting, and the ratio of students to full registrants was very high (approximately 2:3). A week prior to the meeting 626 had registered, of which 229 (36.6%) were Korean and 235 were students. Exhibitors had taken 31 booths. Nine of 58 applications for travel support were honored. Eight of 38 rising star applications were awarded, and five poster prizes were awarded (IUCr, AsCA and RCSB Protein Data Bank). Jenny Martin served as program chair.

Alice Vrielink presented a proposal from Adelaide, Australia, to host a joint AsCA/SCANZ conference and Bragg centenary celebration in 2012 to mark the centenary of the presentation of Lawrence Bragg’s paper defining Bragg’s equation to the Cambridge Philosophical Society. The dates for the meeting are proposed for December 2-6. The Bragg symposium will be a public forum with speakers including descendants of Lawrence Bragg, his former students and high profile scientists. The conference will be held in the Adelaide convention centre. Direct flights are possible from many Asian cities. The IUCr President noted that the meeting would be perfectly timed as a curtain raiser for the 2013 IYCr.

AsCA President Mitchell Guss has received a formal expression of interest from Singapore to hold the 2016 meeting. However, it was noted that if Iran is soon to be included within the AsCA region, a future committee may wish to solicit a bid from that country.