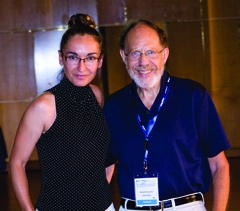 When eukaryotic cells divide, the genetic material has to be accurately divided among the daughter cells. This process involves the interaction of the microtubule mitotic spindle with kinetochores on special regions of the chromosomes. 3-D cryo electron microscopy (cryo-EM) of microtubules complexed with the kinetochore Ndc80 complex produced a structure at sub nanometer resolution where crystal structures of the component parts were docked. The complexes self-assemble along protofilaments suggesting a mechanism for how the kinetochore employs microtubule depolymerization for chromosome movement during cell division.

Bacteria acquire resistance to phages by integrating short fragments of foreign DNA into Clustered Regularly Interspaced Short Palindromic Repeats (CRISPRs). CRISPRs are transcribed and processed into short crRNAs. In E. coli, crRNAs are incorporated into a surveillance complex called Cascade. Cryo-EM analysis of Cascade before and after binding to a target nucleic acid sequence shows that the crRNA is displayed along a helical arrangement of protein subunits that protect it from degradation, while maintaining availability for base pairing. Cascade engages invading nucleic acids through base pairing along the crRNA, resulting in short helical segments that trigger a conformational change likely to serve as a signal for destruction of the invading nucleic acid. 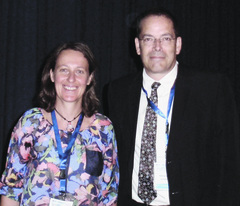 Alessia described the challenge of designing responsive metallo-organic materials with flexible frameworks able to create voids to accommodate small guest molecules. She discussed how to proceed from local design to the control of collective behaviour by tailoring ligands to give metallo-organic complexes with appropriate shapes. Her focus was on wheel-and-axle systems that have two bulky groups (wheels) connected by a rigid linear spacer (axle). Such species possess the structural motifs required to give host-guest properties, and reversibly take up solvent molecules on exposure to the vapour without loss of crystallinity. A number of related materials exhibiting a range of inclusion behaviour were reviewed, from stiff networks that do not include any guest to extremely dynamic materials that easily transform in the solid state to exchange guests by solid/vapour and solid/liquid processes. 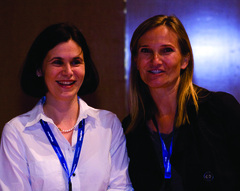 Christiane Schaffitzel gave a beautiful presentation of her work that uses cryo electron microscopy to visualise snapshots during the translation of membrane proteins by the ribosome and their subsequent insertion into the membrane mediated by the signal recognition particle and the FtsY translocation machinery. All three components are exceptionally large and dynamic complexes that bind to each other to form a bacterial factory producing membrane proteins. Christiane and her team have worked out conditions to purify and assemble this factory and how to trap it in specific conformations amenable for 3D reconstruction. It will be exciting to keep watching this space as it will reveal more details of the movie at increasing resolution, which seems to be only a matter of patiently picking more and more particles.

Reports to be continued in Volume 20, Number 1.