Meeting of ECM General Interest Group of Senior Crystallographers (GIG-SC) held at the U. of Warwick 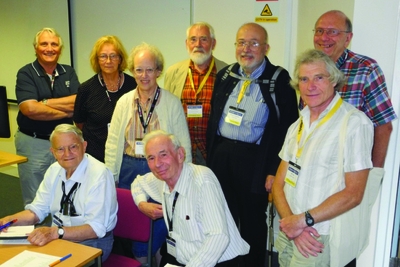 Some of the attendees GIG-SC meeting. (Photo courtesy of Carlo Mealli).

Paul Beurskens (Netherlands) opened the meeting, presented the agenda and summarized the background for the establishment of the GIG-SC. The history of crystallography was the subject of a lively discussion. It was felt that although we are not historians we should record our reminiscences about important events and crystallographers for posterity, drawing upon written records in our own countries. The magnificent Bragg exhibition that Mike Glazer had created for ECM 28 was highly praised. Howard Flack had expressed an interest in editing a homepage for the GIG-SC. Herbert and Frances Bernstein offered help. Election of a new chairperson was discussed. Paul Beurskens did not want to continue as an officer but he was willing to maintain the mailing list. Sine Larsen might accept in about two years when her research grant expires. She promised to offer support to Svend Erik Rasmussen if he would assume the task of chairperson. He agreed to do so with the caveat that he might not be alive at the time of the next ECM in 2015.