The International School on Crystal Growth, Characterization and Applications (ISCGChA) was held December 9-13, 2003, in La Pedrera, Uruguay, a small resort on the Atlantic Ocean. The ISCGChA was supported and promoted by the Commission on Crystal Growth and Characterization of the IUCr and sponsored by the IUCr, the United Nations Educational, Scientific and Cultural Organization (UNESCO), the IKZ (Inst, für Kristallzüchtung, Germany), and the Scientific Research Commission (CSIC) of the U. of the Republic, Uruguay. The ISCGChA was held under the auspices of the Faculty of Chemistry of the U. of the Republic, Uruguay. The organizers are very grateful to all sponsors because without their support this important school for young scientists in Latin America would not have been possible. Additionally, the efforts of the members of the scientific and organizational committees were also a big factor in the success of this event.

The ISCGChA promoted effective training of students and young scientists in the fundamentals and methods of crystal growth, their characterization and applications. For several of the young attendees this was their first opportunity to take part in such a meeting, and it was undoubtedly an important step in their careers. The school provided the chance for some of them to make new professional contacts, which may well develop into lasting friendship. The ISCGChA showed the stage of research in this field that is being done in Latin America as a whole. IUCr Executive Committee member, I. Torriani, gave an overview about the progress of crystallography in Latin America and emphasized the role of the IUCr in this development. This meeting was an excellent opportunity for researchers from all over the world, but especially from this region, to meet each other, share their experiences, start new cooperative projects and reaffirm current ones, all in an environment of friendly comradeship.

Forty-nine scientists participated in the ISCGChA. There were lecturers and attendees from eleven nations, six of them of Latin America. That is the highest number of Latin American countries represented at a gathering of crystals growers in this region. Seventeen students and young scientists were able to attend (out of the thirty who originally applied) thanks to grants from the IUCr, UNESCO and IKZ.

Four lecturers from Uruguay introduced the crystallographic and materials groundwork. Aspects of structural determination were explained by A. Mombrú and R. Mariezcurrena. The influence of crystal imperfections on material properties was covered by E. Quagliata and R. Marotti. 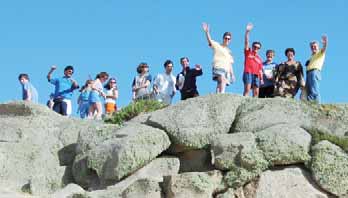 Participants of the ISCGChA 2003 on the Dunes in Cerro de la Buena Vista.
Lectures on crystal growth methods and their experimental results were given by A. Ibañez (France) on modern solution growth techniques and by A.C. Hernandes (Brazil) on laser heated pedestal fiber growth. Numerous lectures demonstrated the importance of crystal growth for modern applications. Basic aspects of MOVPE growth, especially nitride layers, were explained by M. Bosi (Italy). T. Ohachi (Japan) showed newer results of heteropitaxy of GaN on Si by MBE. A. Moreno (Mexico) reported the 2D and 3D characterization of biological macromolecules by AFM and XRD. Some lectures covered further crystal growth advances for specific technological applications carried out in Latin America. G. Nieva, H. Cánepa and M. Sade spoke about the progress made in Argentina in the area of high temperature superconductor single crystals, epitaxial growth of HgCdTe for infrared detectors, and single crystals of Cu alloys with shape memory properties, respectively. L. Fornaro (Uruguay) gave a lecture about the growth of thick films of heavy metal iodides for ionizing radiation imaging. Finally, an overview on future applications of crystals and nanostructures was given by E. Diéguez (Spain).

The poster sessions were held during two afternoons. However, all thirty-nine posters were displayed over the whole meeting to ensure maximum exposure and interaction between participants, who engaged in very lively discussions throughout the sessions. These contributions showed the activities of twenty-three research groups worldwide. Five awards, consisting of the last five years of the American Crystallographic Assn (ACA) Transactions, were given by I. Torriani to selected participants. Further, a prize from the IUCr, a one-year complimentary on-line subscription to all of the IUCr journals, went to the Faculty of Chemistry, U. of the Republic, Uruguay. Last, the best posters were awarded by I. Torriani with a two-year complimentary membership in the ACA to Erick Juarez (Mexico) and Ana Lía Noguera (Uruguay).

A booklet with abstracts of the lectures and posters presented at ISCGChA were given to all participants. A special part included the sheet copies of the fundamental lectures of P. Rudolph on thermodynamics and kinetics of crystal growth. An internet connection, usable for all participants, was provided throughout the school. It is a special pleasure to gratefully acknowledge the work of people from the Instrument Dept. of the Faculty of Chemistry (L. Mussio, A. Gancharov, H. Bentos Pereira) who assembled the computer, media and internet facilities. The lectures, poster session, prizes ceremonies and the excursion to the Cerro de la Buena Vista, where the dunes reach up over a mass of granite rock, were partially recorded, and a special CD of highlights has been made. More details about the ISCGChA can be found at www. iscgcha2003.fq.edu.uy.


Laura Fornaro, Chairman of the ISCGhA
Peter Rudolph, Member of the Int'l Scientific Committee of the ISCGhA
and IUCr Commission on Crystal Growth and Characterization