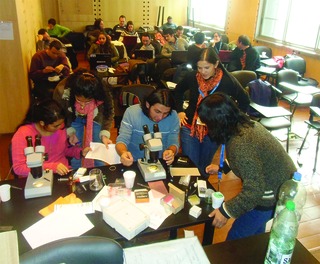 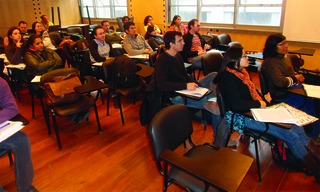 Participants during a lecture.

A Type 1 OpenLab was held in Montevideo, Uruguay, this southern winter, motivated by the recent installation of the Bruker D8 Venture diffractometer at the Facultad de Química, U. de la República, Montevideo. The event, organized by the Laboratorio de Cristalografía, Estado Sólido y Materiales (Cryssmat-Lab), Cátedra de Física, DETEMA, and supported by the Facultad de Química, the Ministerio de Educación y Cultura of Uruguay, the Regional Office of Science for Latin America and the Caribbean of UNESCO and the IUCr, brought together 20 participants (young professors and advanced PhD students) from Argentina, Brazil, Costa Rica, Colombia, Perú and Uruguay who had the chance to learn the fundamentals and applications of single-crystal X-ray diffraction. From the 20 participants, 13 brought single crystals and were able to collect data and make the structure determination and refinement of their own structures on site, and had the chance to follow the whole process from crystal mounting to CIF preparation with their own samples and results.

One full day of the program (Sunday, July 27th) was devoted to collecting data to allow all participants to have their own data to work on practical aspects of refinement and CIF construction by themselves. Finally, the advanced participants enjoyed a special topic lecture on charge-density analysis given by Claude Lecomte, Vice-President of the IUCr.

During the official Opening Ceremony of the OpenLab, the official inauguration of the Single-Crystal X-ray Diffraction Laboratory of the Facultad de Química took place, in the presence of authorities or representatives from the U. de la República, the Facultad de Química, the Comisión Sectorial de Investigación Científica (CSIC), the Agencia Nacional de Investigación e Innovación (ANII) and the Programa de Desarrollo de las Ciencias Básicas (PEDECIBA), who provided the funds to purchase the instrument. Claude Lecomte introduced IYCr2014 to the participants and representatives from UNESCO and the Ministry of Education and Culture of Uruguay (co-sponsors of the OpenLab with Bruker), emphasizing the importance of the state-of-the-art equipment now available in Uruguay thanks to the synergic work by the IUCr, local Uruguayan agencies and Bruker.

The last morning of the event was devoted to presentations by the participants. Those who solved their structures showed their results, discussed their problems and received advice on how to finalize their work from other participants and lecturers. The last activity was the evaluation of the event. A round of comments from the participants suggested a unanimous positive view of the event when considered overall. Suggestions on the time distribution and an emphasis on different topics were received and will be used to adjust the program for future events of this kind. The list of participants, including contact information, and a summary of answers from a detailed and anonymous evaluation questionnaire are available from the web site of the OpenLab (http://cryssmat.fq.edu.uy/OpenLab/evaluationbyparticipants.pdf).