Workshop on X-ray lasers for Biology 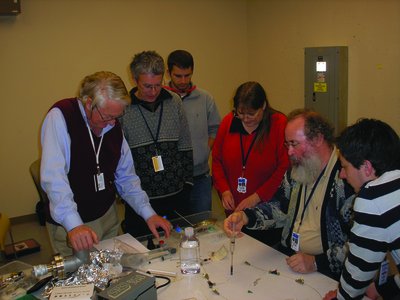 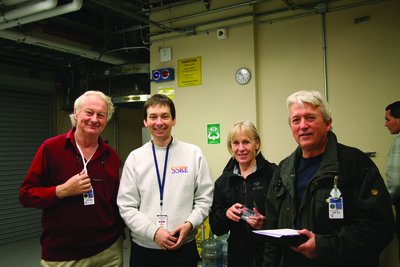 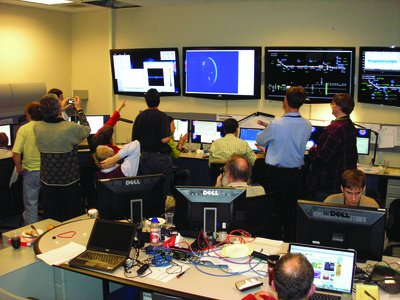 The control room at LCLS on Dec 13, 2009, as the first patterns arrive on the big screens from Photosystem I nanocrystals.

In mid-2009 the world’s first hard X-ray laser, the Linac Coherent Light Source (LCLS), became operational at SLAC near Stanford, CA, USA. Later that year it was first applied to biological samples by a large collaboration between Heidelburg MPI, DESY (Hamburg), Arizona State University, Uppsala University, SLAC, LLNL, LBNL, and others. At that time the LCLS produced about 1E12 photons in each 70 femtosecond pulse, at 60 Hz and 1.8 kV with a 7 micron diameter beam. The group was thus able to record and read out snapshot diffraction patterns at 60 Hz using the fast 1K×1K detector at 8.5 Å resolution, from both single viruses and protein nanocrystals, producing terabytes of data and millions of diffraction patterns. The samples were sprayed across the X-ray beam in a liquid column, single-file synchronized droplet, or gas jet, and so can be fed from a liquid phase. The results depend on the fact that such a brief, intense X-ray pulse terminates before the samples are vaporized, giving excellent diffraction patterns by a 'diffract-before-destroy' mechanism. The results were first published in Nature in two papers on February 3, 2011, the first led by H. Chapman, J. Spence, P. Fromme, I. Schlichting, J. Ulrich and others on diffraction from membrane protein nanocrystals, the second led by J. Hajdu and M. Seibert on single virus diffraction and image reconstruction. (Both papers have about 80 additional co-authors, many common to both papers, including the team which made the remarkable chamber and detector system). Many more experiments have been done since this work was completed in December 2009, such as pump-probe time-resolved diffraction, with the LCLS now running up to 12 kV at higher repetition rate, limited by the detector read-out time. A sub-micron beam diameter is promised for the near future. Many papers have already been published concerning the problems of single-particle orientation and conformation determination from diffraction patterns, on the dynamics of the damage process, and on nanocrystal data indexing, phasing (using oversampling), and merging (see Chapman, Nature Materials, 8, 299 (2009), Kirian et al. Optics Express, 18, 5713 (2010), and the two Nature papers for reviews and references).