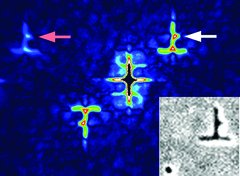 The use of multiple, oriented and singly referenced objects was evaluated as a means to overcome the low scattering cross section inherent in hard X-ray Fourier transform holography. The nanofabricated test pattern consisted of identical characters, each with a reference dot, arranged in a 5 × 5 matrix. The image of each object was restored as in the conventional single-object case. This technique can be considered as a means to image biological macromolecules or their assemblies, which diffract weakly but of which identical copies are available.