The Gregori Aminoff prize to Lahav and Leiserowitz 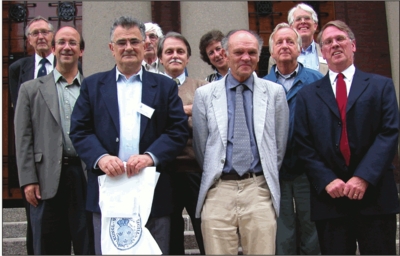 Lecturers at the Aminoff symposium. (left to right) Ivar Olovsson (organizer), Michael Ward, Meir Lahav, Jack Dunitz, Angelo Gavezzotti, Lia Addadi, Leslie Leiserowitz, Jens Als-Nielsen, Michael McBride, Stephen Byrn.
The Royal Swedish Academy of Sciences has awarded the Aminoff prize for 2002 to Meir Lahav and Leslie Leiserowitz from the Dept. of Materials and Interfaces, Weizmann Inst. of Science, Rehovot, Israel, for their fundamental studies of crystal growth and application to separation of enantiomers and for their studies of surface structures by synchrotron radiation. The prize was presented at the ordinary meeting of the Academy on September 11.

A symposium on the theme ‘Crystal Growth and Surfaces’ was arranged the following two days. The following lectures were delivered: