Each Commission is defined by its Terms of Reference, which are approved by the General Assembly of the IUCr.

The Commission on NMR Crystallography and Related Methods was established at the Montreal General Assembly in August 2014.  The Commission will serve several useful roles for the community that studies the crystalline state using magnetic resonance, as well as for the larger crystallographic community.  The terms of reference are as follows:

The NMR community already operates under some guidelines put forward by IUPAC. These mostly concern chemical shift referencing – a not unimportant issue for the proper collection, analysis and reporting of spectral data. The proposed Commission will first identify areas in need of common spectral standards, and then serve as a clearinghouse for these issues. Members will be chosen who have familiarity with the technical complexities that arise in this area. The Commission may work toward the development of a common format for sharing magnetic resonance crystal information – modeled on the Crystallographic Information File format – that would keep track of raw NMR data and extracted information. At present, there is no such common standard in the NMR community, though some national crystallographic societies are already active in proposing such extensions. Additionally, integration of NMR data into structure search formats is already under development or may be soon, in packages such as FOX and Jana2006. Such integration could also be linked to topological crystallography software packages, such as TOPOS.

The Commission may undertake the compilation of basic NMR crystallographic knowledge into usable International Tables for NMR crystallography. Such a compendium may contain a list of irreducible crystallographic symmetries – akin to listings used in infrared, Raman and UV spectroscopy – as well as symmetries related to NMR pulse sequences used for selective extraction of spin interactions. Another specific contribution would be a section for correspondences between the quantum description of NMR observables and the associated structural parameters. Most of these notions, familiar to spectroscopists manipulating phase coherence, are not commonplace for methods without such phase coherence. The Commission may also endeavour to simplify and systematize the taxonomy (and terminology) to bridge NMR and diffraction based fields. Additionally, cross-Commission efforts should be made to integrate recent developments in other areas. One such example is the incorporation of topological crystallography, which is under the purview of the Commission on Mathematical and Theoretical Crystallography, into NMR crystallography.

As the number of manuscripts submitted to peer-reviewed journals that employ magnetic resonance in the study of the crystalline state rises, editors and referees unfamiliar with NMR may need some guidelines for how to assess the quality of data reported, as well as the level of experimental detail that is commonplace in NMR forums. The proposed Commission could put forward a set of recommendations for journals in the larger crystallographic community. As such, there should be some representation within the Commission from the community of current or former journal editors. This could also provide a fruitful intersection with the existing Commission on Journals. Several leading journals have had recent themed issues on NMR crystallography. The Commission may promote the use of IUCr journals as a stable forum for NMR crystallographic articles, which are currently scattered in many different broad-audience journals.

Conferences in NMR crystallography have already been organized in recent times. The SMARTER series of conferences is the most obvious example with an approximate audience of about 100 participants. This conference has been supported since its birth in 2005 by the IUCr Commission on Inorganic and Mineral Structures. Other conferences, such as the Gordon Research Conference (GRC) on Computational Aspects – Biomolecular NMR and the Experimental NMR Conference (ENC), have held themed sessions on NMR crystallography. Judging by the recent publication and conference activity, it is clear that the magnetic resonance and crystallographic communities are cross-fertilizing. For graduate students in one area, accessibility to working knowledge in the other field will be critical in their training. There is great potential for targeted workshops to help such students. For example, a hands-on workshop for a graduate student in crystal engineering in solid-state NMR would be of great value. A series of regional workshops, which would reduce travel costs and showcase local NMR capabilities, might cover theory basics and simple data collection. A short course – in the spirit of the Gordon Research Seminars – that precedes a major meeting could also be of useful service to the NMR crystallographic community. Such a mechanism would provide an efficient way to leverage against existing travel plans, and it could serve as an international networking opportunity for young researchers.

Serve as a liaison to commercial vendors

Both diffraction and NMR rely on expensive equipment, which is sold by a handful of vendors that market diffraction and magnetic resonance instruments. The IUCr likely does not want to get involved in the commercial side of crystallography, yet the truth is that researchers in both NMR and diffraction have a symbiotic relationship with the vendors that manufacture and sell the instruments. Researchers rely on healthy Research & Development that stems from friendly competition between the vendors to spur innovation, which, in turn, leads to the next generation of capabilities. The Commission could serve in some capacity as the representative for the research community, giving feedback and gentle encouragement to the vendors as warranted. A working relationship between the Commission and leading vendors can also be tapped to support conferences, workshops and student travel, as the need arises. In NMR, the main vendors are Bruker, Agilent and Jeol, with many small companies providing consoles, magnets, probes, software packages and services. The three main companies in NMR also have a significant presence in the diffraction community.

The Commission will tailor its efforts in conjunction with regional and international bodies, such as the International Society for MAgnetic Resonance (ISMAR) or the American Crystallographic Association (ACA), to advance its agenda.
These pages are maintained by the Commission Last updated: 15 Oct 2021 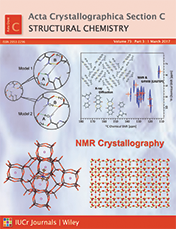