Crystallography around the world: Turkey

This is a list of forthcoming meetings in Turkey that are recorded in the IUCr Calendar of Events. Please let us know of any that are missing by completing this form or sending an email to forthcoming.meetings@iucr.org.

Reports of past activities in Turkey

Crystallography became an independent scientific discipline in Turkey in the 1960's. Crystal geometry and optics were taught in the Geology and Mineralogy Depts. to prepare students for microscopic investigation of crystalline materials. In some departments, including the Mineral Research and Exploration Inst. of Turkey (MTA), X-ray powder diffractometers were used for materials identification. In physics and chemistry departments, crystal symmetry, physical and chemical properties of crystals were taught without structure analysis.

The SESAME (Synchrotron Light for Experimental Science and Applications in the Middle East) Project, developed by UNESCO, will further expand crystallographic research in Turkey. SESAME, based in Jordan, will provide opportunities for research in structural molecular biology, environmental, surface and interface science, microelectromechanical devices, X-ray imaging, archaeological microanalysis, and materials characterization. The founding members of the project are Bahrain, Cyprus, Egypt, Iran, Israel, Jordan, Pakistan, the Palestine Authority and Turkey. Turkey will be involved in building the protein crystallography and powder diffraction beamlines. Young Turkish scientists have benefited from extensive training in accelerator technology and applications at different European, US and Taiwanese Light Source laboratories (for more information, see: www.sesame.org.jo). 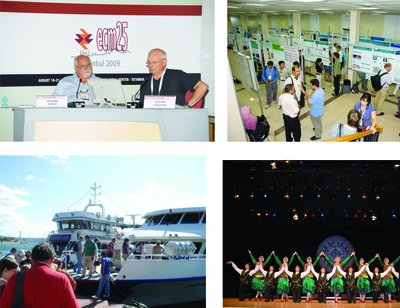 Photos from the ECM25 Istanbul Meeting.

The Turkish Crystallographic Association (TCA; www.tucr.org), formed in 2001, presently has about 140 registered members, one fourth of whom are senior scientists. The TCA was accepted in the European Crystallographic Association at its General Assembly in Cracow in August 2001. TCA organizes biannual National Meetings and workshops. W. Duax, J. Glusker, G. Cascarano and P. Rizkallah attended the 2006 National Meeting held in Kayseri. The 25th European Crystallographic Meeting was organized in Istanbul in 2009 by TCA (IUCr Newsletter, Volume 18, Number 1, 2010).

The Material Research Laboratory at Ankara U., Ankara (contact: elerman@eng.ankara.edu.tr) collaborates with research centers in Germany on single and powder crystal diffraction analysis of electrical, magnetic and specific heat properties of mono- and hetero-crystals and rare earth alloys. They also perform research related to the production and characterization of rare earth-intermetallic magnetic compounds between 2 K and 350 K, magnetocaloric materials, hard and soft magnetic materials, magnetic sensor materials and nanomagnetism.

Studies in the Molecular Biology Research Laboratory at Sabancı U., İstanbul (contact: zehra@sabanciuniv.edu) are focused on determining mechanisms of fundamental processes in living organisms, prediction of function from the 3D structure, and for engineering new systems via cloning, purification, characterization, and 3D structure determination using synchrotron X-ray solution scattering and diffraction techniques. The current applications include environmental pollution remediation and pathogen resistance in plants. 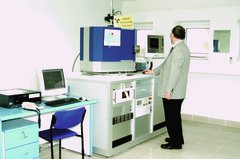 The introduction of the IPDS II diffractometer with a low temperature apparatus in the Physics Dept. at Ondokuz Mayıs U. (OMU), Samsun, (contact: orhanb@omu.edu.tr) has allowed fourteen researchers from the academic staff as well as a number of MSc and PhD students to study organic crystals with non-linear optical properties, the biological activities of novel saccharin and acesulfame metal complexes, structural and magnetic properties of dimeric cyano complexes, supramolecular structures and crystal engineering. The academic staff in the Department cooperates with researchers from different areas of science.

The X-ray Research Laboratory at Erciyes U., Kayseri (contact: akkurt@erciyes.edu.tr) operates an Enraf-Nonius Diffractis 583 X-ray generator, Weissenberg and Buerger Precession cameras, and one microdensitometer. The U. of Technology Research Center has a Bruker AXS D8 Advance X-ray powder diffractometer and a LEO 440 scanning electron microscope. The group members work on structures of organic and metal-organic compounds with medical and pharmacological properties, and quantum mechanical calculations of crystal phase identification and analysis.

In the X-ray Crystallography Laboratory at Kırıkkale U., Kırıkkale a full circle single crystal X-ray diffractometer Rigaku MSC/AFC-7s and a TEM were purchased in 1998 for studies including boron complexes obtained from acidic amines, amides and organics, Al and Cu based microstructures, and metallic borons.

M. Aygün and his coworkers from the X-ray Crystallography Laboratory at Dokuz Eylül U., İzmir (contact: muhittin.aygun@deu.edu.tr) are interested in intermolecular interactions of N-Heterocyclic Carbene (NHC) complexes with transition metals and the theoretical foundations of classical crystallography (CCr) and quantum crystallography (QCr).

Crystallographic work in İstanbul started in 2003 when the Advanced Analysis Laboratory was established at İstanbul U. (contact: ial@istanbul.edu.tr) with single crystal (Rigaku R-AXIS Rapid-S) and powder diffraction (Rigaku D-Max family) studies of natural and synthetic organic and inorganic molecules, and phase analysis of functional materials and clays.

A crystallography laboratory in Atatürk U., Erzurum was established in the Organic Chemistry Dept. in 2005, where the synthesis of natural products, synthetic organic chemistry studies, asymmetric synthesis and mechanistic studies are conducted. Together with organic and inorganic compounds from other working groups, an average of 40-50 structures are determined per year. 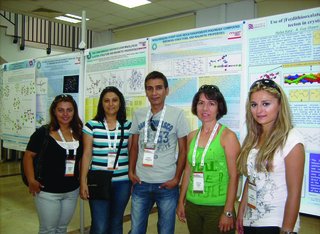 A research group at Balıkesir U., Balıkesir (contact: hkara@balikesir.edu.tr) works on the structures and magnetic properties of novel polynuclear Schiff base transition metal complexes that have potential applications for storage of information at the molecular and nanoscale level. The group plans to develop new materials with novel magnetic properties, such as single molecule magnets, for technological applications.

Other institutions in Turkey that operate diffraction facilities

Some laboratories running X-ray diffraction facilities exist as research infrastructure of the Applied Physics and Material Science Depts. located at the Middle East Technical U. (Metallurgical & Materials Dept. and Central Research Laboratory), Anadolu U. (AUBIBAM, Eskişehir), Gazi U. (Semiconductor Tech. Adv. Research Laboratory), Harran U. (Urfa) and İzmir Inst. of Technology (Materials Research Centre, İzmir). In addition to these, there are many industrial institutions in Turkey including labs that perform powder diffraction for materials characterization and quality control, such as the Turkish Atomic Energy Agency, the General Directorate of Mineral Research and Exploration, the General Directorate of Highways and the General Directorate of State Hydraulic Works.