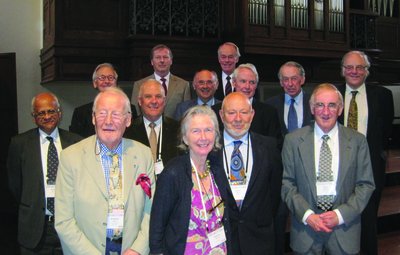 The 12th Asian Crystallographic Meeting and the Bragg Centennial Symposium were held in Adelaide, December 2-6, 2012. At the Bragg Symposium fifteen speakers presented lectures on the life and work of the Braggs and their remarkable impact on the science of the last 100 years. W. L. Bragg is still the youngest person to have received a Nobel prize. In 1915, at the age of 24, he shared the prize with his father. The Bragg equation was entirely the work of the son, reported in a paper read at the Cambridge Philosophical Society in November of 1912. Working together the father and son determined the crystal structure of sodium chloride. This structure determination not only confirmed the power of the equation and the accuracy of Bragg's theories but unequivocally demonstrated that sodium chloride was a salt composed of separate ions and not a molecule as was widely 'believed' at the time. As late as 1927, the President of the Royal Society of England continued to disparage the crystallographic finding and dismiss the absurd notion that sodium chloride was not a molecule.

Nevertheless, the significance of the new science of crystallography was immediately recognized with a Nobel Prize to the Braggs. Over the past 100 years more crystallographers have been awarded Nobel prizes than people working in any other scientific discipline. After making early applications of crystallography to the structures of metallic and organic structures, Bragg went on to nurture the beginnings of macromolecular structure determination and analysis. Many speakers in the session reviewed the highlights of the past century of crystallography and expanded on recent technological advances that are opening the way to analysis of larger and more complex systems as well as single molecules. These new developments promise to keep crystallographic analysis powerful and pertinent well into the next century.

Lawrence Bragg's youngest daughter, Patience Thomson, presented a wonderful lecture describing her father's gentle, kind and delightful personality, and the audience of over 350 people were able to view films of his lucid and lively explanations of structural biology for the layman that were broadcast on BBC television in the 1950s. That evening in the former Bragg home in Adelaide (designed by and for them), Lawrence Bragg's granddaughter and grandson described their memories of a caring grandfather and the menu was composed of what Patience remembered as her father's favourite dishes. Articles by the lecturers at the Symposium are available in the Bragg Centennial Issue of Acta Crystallographica A (January 2013 issue).