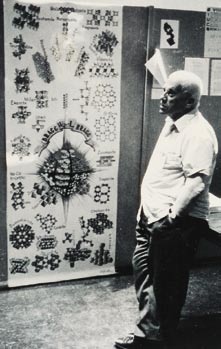 N.V. Belov presenting a poster at the VIII IUCr Congress at Stony Brook, NY (USA) in 1969.
In 1969, I was appointed Chairman of the Non-Commercial (Instrument) Exhibit of the VIII IUCr Congress. In addition to providing space for people to exhibit their instruments, I made announcements in several publications and contacted the editors of some journals to find names of people who had submitted articles on crystallographic equipment. These people were invited to submit reprints, preprints or posters of their instruments, if they could not bring them to the meeting. We ended up with what was probably the first Poster Exhibit at a scientific meeting. On the first day of the meeting, we were surprised to see Prof. N.V. Belov of the USSR Institute of Crystallography show up toting a large poster. This poster was a  tribute to the Braggs and showed the structures of a number of silicate minerals that had been determined by Belov’s group. We gave him a suitably prominent location to display the poster and I took a photograph showing him, in a relaxed mood, next to the poster.
Reuben Rudman