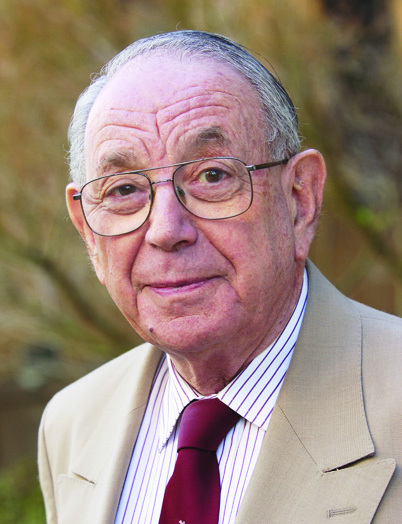 Hans Freeman, Emeritus Professor at the U. of Sydney, died on November 9, 2008. He authored over 160 research papers and received practically every honor available to a chemist in Australia including the Burrows and Leighton medals of the Royal Australian Chemical Inst. and the Craig medal for chemistry from the Australian Academy of Science. He was elected as a Fellow of the Academy in 1984 and was recognized by the Australian Government for contributions to chemistry by being made a Member of the Order of Australia in 2005. Hans excelled in teaching, research, and service to the community. His pioneering research achievement was to establish the field of protein crystallography in Australia and to lead the team that solved the first structure of a ‘blue’ copper protein, plastocyanin. He was in the laboratory until a few weeks before his passing doing what he loved best. He will be sadly missed by all who had the privilege to know him.

Hans was born in Breslau, Germany in 1929, his family left for Australia in 1938. He received an MSc (1952) and PhD (1957) from the U. of Sydney. He was awarded a Rotary Foundation Fellowship (1952-3) to spend time at the California Inst. of Technology where he learned the fundamentals of crystallography with Eddy Hughes. From the outset, his interest was in molecules of biological significance. The structure of biuret hydrate formed the basis of his PhD dissertation. From there he refined the focus of his work to metal complexes of peptides, and then later to metalloproteins.

In 1970 the U. of Sydney offered Hans an opportunity to explore new areas of research and the first protein crystallography laboratory in Australia was formed. He dedicated the first goal of the laboratory to the solution of the structure of plastocyanin. The visualization of the structural basis for the 'blueness' of 'blue' copper proteins was a significant achievement in the field of bioinorganic chemistry.

Hans was instrumental in the formation of the Society of Crystallographers in Australia (SCA, later to become SCANZ) and was elected its first president in 1976. He was the program Chair for the very successful 1987 IUCr Congress in Perth and the residual income from the Congress has been used to fund travel by Australian and New Zealand students and to bring a distinguished lecturer to local meetings.

Hans was a charismatic lecturer for whom teaching was a love and a privilege and never an obligation. He continued teaching a special first year class long after his formal retirement. He was conscious of the fact that Australia suffered from a tyranny of distance that meant senior students had fewer opportunities than those in the northern hemisphere to interact with leading researchers. In 1972, he was instrumental in the formation of the Foundation for Inorganic Chemistry at the U. of Sydney, that each year since has brought one or two international scientists to the school to deliver a series of lectures.

Hans leaves behind a legacy of significant research, institutional innovations and generations of students imbued with a love of science.