IUCr2011 in the language of Cervantes?

No, don’t worry; the official language of the XXII Congress and General Assembly of the IUCr will not be Spanish, although this international event will be held for the first time in Spain, in Cervantes’ country. We kindly invite you to join us and to experience Spanish hospitality and especially that of Madrid in August, 2011.

Spain and Spanish crystallographers joined the IUCr in 1949, just two years after the birth of the Union. When Acta Crystallographica appeared in 1948, the first article published in its first volume was signed by the young Spanish crystallographer Julio Garrido on 'Observations sur la diffusion des rayons X par les cristaux de ClO3Na' (Acta Cryst. 1948, 1, 3-4). Today crystallography is well established in Spain and crystallographic teams are distributed all around our motherland. Including the crystallographers that officially joined the Spanish Group of Crystallography and Crystal Growth (Grupo Especializado de Cristalografía y Crecimiento Cristalino, GE3C) and those belonging to other associations like Neutron Users, Solid State, Proteomics, Surfaces etc., over 400 Spanish scientists are engaged in crystallographic research, sharing diffraction facilities located not only in Spain (like the recently inaugurated Spanish synchrotron ALBA) but also at other international facilities (ILL and ESRF) with financial support from the Spanish Government.

At the Executive Committee meeting arranged during the Third General Assembly in Paris in July 1954, it was proposed that the IUCr should organize specialized symposia between the assemblies and the first of these meetings (Structures on a scale between the atomic and microscopic dimensions) was held in Madrid in 1956. In April 1974 an Inter-Congress Conference also took place in Madrid on the subject of Anomalous Scattering and ECM-6 was held in Barcelona in 1980. Now we are hosting the XXII Congress and General Assembly of the International Union of Crystallography in Spain, nearly one hundred years since the Laue and Bragg experiments, a memorable event from both scientific and social perspectives. 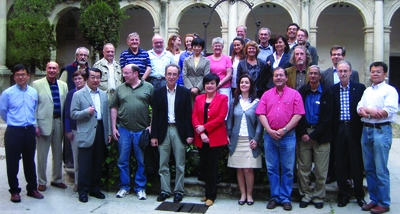 The IPC members met in May, 2010, at the 'Patio del Pozo' of the University of Alcalá, one of the oldest universities in the world.

The Local Organizing Committee and the International Program Committee (IPC) have been working hard to prepare a scientific program of the highest quality. The IPC has requested the approval of the IUCr Executive Committee for a program of 4 Plenary Lectures, 36 Keynote Lectures and 98 Microsymposia. A number of Satellite Meetings and Workshops will take place throughout Spain. The Congress will cover the most relevant areas of interest, from Crystal Growth to Crystallography and Art, and include Biological Macromolecules, Material Science, Organic and Coordination structures, Topology, Diffraction Physics, Surfaces etc.

The Congress Venue (Palacio Municipal de Congresos) is located a few meters from one of the newest Metro lines (connecting the city centre and the Airport in about 15 minutes). It provides the necessary technology and services as well as two auditoriums, large halls and rooms with different capacities and large exhibition areas. Moreover, Madrid, the capital and largest city of Spain, located in the centre of the country, represents the perfect symbiosis and harmony between efficiency and quality of life, at a price that is hard to beat anywhere else in the world. It is a city where you will find everything..., including splendid and ancient World Heritage sites (Alcalá de Henares, Toledo, Ávila, Segovia and Salamanca). We are preparing a very open meeting for all crystallographers from all over the world, a place where everybody can feel satisfied in all aspects, and we invite you to attend, support and contribute to this Congress.