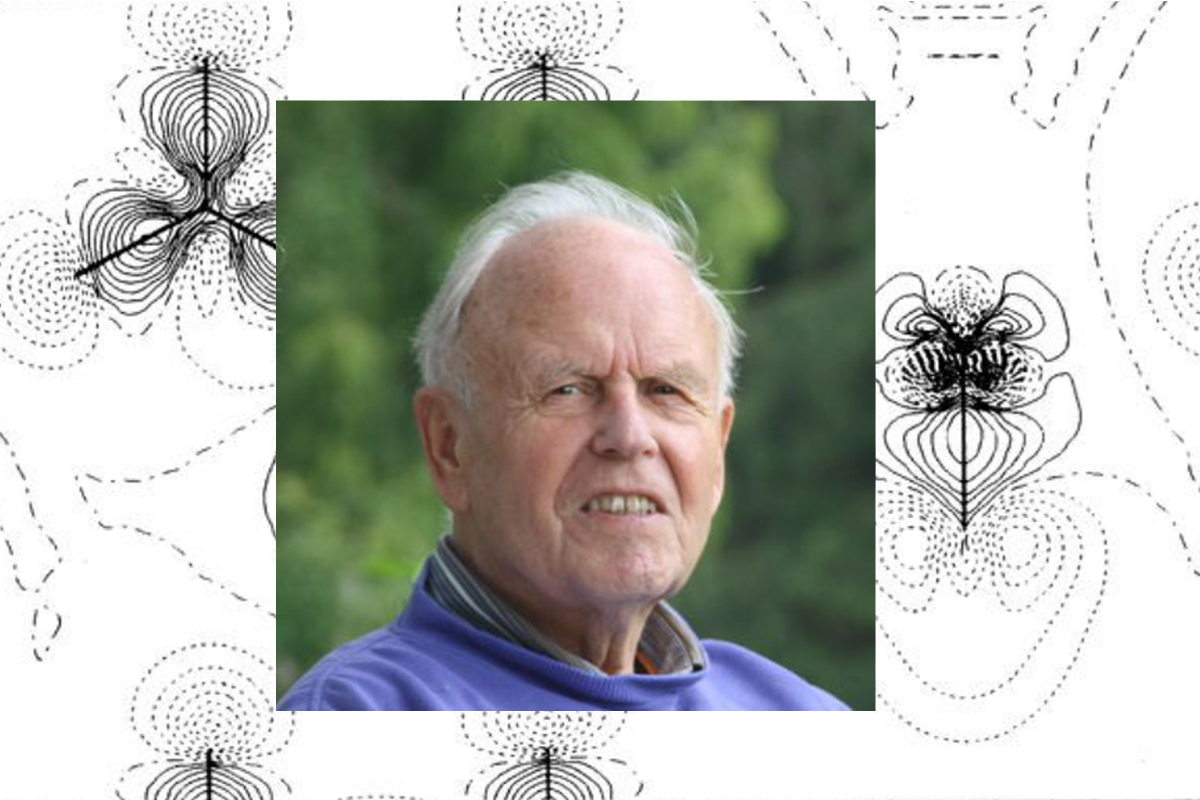 Dick Feil (photo credit: M. Luizink) against a background of an Acta Cryst. B figure. Dick was Chair of the IUCr Commission on Charge, Spin and Momentum Densities (now Quantum Crystallography) from 1993 to 1996, having been a member since 1987.

Dirk (Dick) Feil passed away on 22 April 2020 at the age of 87. Dick Feil was born in Zeist, The Netherlands, in 1933. Married in 1958, Dick and his young wife Annet set out to see something of the world. In 1959, despite misgivings about the apartheid regime, Dick took up a lectureship at Cape Town University in South Africa, which itself was opposed to apartheid. The experience was, as Dick recalled, formative. Dick Feil received his PhD in 1961 under Professor J. M. Bijvoet.

In 1964 the family returned to Enschede where, three months after the creation of the TH Twente, Dick assumed the position of lecturer in physical chemistry. Two years later he was appointed professor in chemical physics. Thus began an association that was to span 55 years. In 1998 Dick was appointed Professor Emeritus, the same year in which he retired. Post retirement Dick maintained an active interest and participation in university life.

Dick’s research largely focused on the interaction between quantum chemistry and crystallography. He loved the beauty of theoretical formulations, Maxwells’ equations being a particular delight. He was one of the early group of crystallographers to use experimental X-ray diffraction data to determine charge density and electrostatic potentials, and to compare them with theoretical calculations.

Dick loved to teach. A gifted and enthusiastic teacher he taught and mentored many students over a long period. His lab was always welcoming to visitors, readily accepting them as colleagues and oftentimes providing access to computing and other resources. He was actively involved in the IUCr, the Dutch Crystallographic Society (NKV) and in the inception of the ECA in 1972. He was also an excellent speaker and gave many memorable talks at various conferences and meetings.

Beyond his scientific and lecturing duties Dick was integral to the creation of the Committee for International Cooperation and Assistance Twente (CICA-Twente), resulting in projects in Bandung, Nigeria and Zambia. In 1975 he initiated a group dedicated to development studies, the Department of Developmental Studies (VOK).

Outside university life, Dick was a keen camper and sailor, vacations often spent with family on the many lakes and waterways that span The Netherlands. Active in his local community, Dick was a passionate advocate for the environment and equality.

Dick was resolute in his conviction that dialogue and exchange of ideas were essential to understanding and overcoming differences, a conviction that he applied equally to both his scientific work and his championing of social issues.