The 13th Slovenian-Croatian Crystallographic Meeting followed the tradition of the previous ones to be yet another example of joining people together in science and pleasure. Sixty seven crystallographers with accompanying persons predominantly from Croatia and Slovenia, have proved once again that we are able to maintain a reasonably high scientific level of crystallographic research and at the same time maintain friendships inside our crystallographic community. 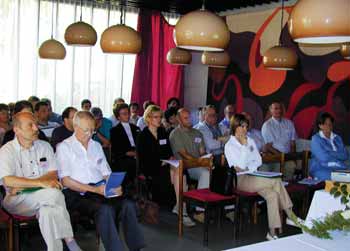 Our thanks to our permanent Honorary Chairmen, L. Golic (Ljubljana) and B. Kamenar (Zagreb), who started our meetings in 1992 after the disintegration of Yugoslavia and have continued to organize these annual meetings. We wish them all well and good health in the future. 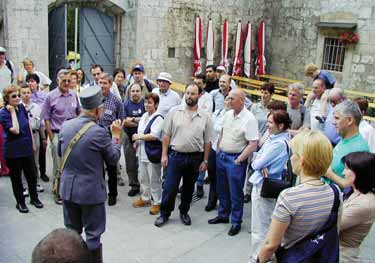 There was an afternoon trip to Kobarid World War I Museum and the fortress Kluze.
The afternoon excursion was to the museum of World War I in Kobarid and to the fortress Kluze in the valley of the Soca river. The beautiful Trenta Valley, from the emerald river to the summit of the mountains was the scene of the cruel wars of 1916, when in these parts the Austrian and Italian armies faced each other, bleeding from violent attacks and counterattacks, while down in the valley the young Hemingway was witnessing scenes of horror and turning his bitter experience into an inspiration for his famous novel A Farewell to Arms. Those mountains towering above the Soca river (Isonzo in Italian) were destined to see twelve bloody battles, some of which are counted among the hardest battles of the First World War. These mountains lining the Soca Valley long ago became a wall between the two worlds, but now the border has disappeared, since Slovenia joined EU in May 2004.

It is a fact that crystallographers from Slovenia and Croatia, with participants from other countries, have been gathering now for 13 years, since 1992. There is an increasing impact of crystallography on science in our developing countries, as well as in the world.

With great pleasure we greet our guests each year from abroad and we try as much as possible to keep the meeting without a registration fee, which is unique in the world of conferences. Next year's meeting will be organized in June 2005 at the Istrian coast in Croatia. There is an open invitation to all bona fide scientists and friends to attend the 14th Croatian-Slovenian Crystallographic Meeting. For further information, contact S. Popovic (Zagreb, Croatia) at spopovic@phy.hr.

Now it is my turn to say several words at the closing point of our meeting, on behalf of the honorary chairmen, Professors Goliè and Kamenar, on behalf of the co-chairmen and my friend V. Leban, and on behalf of SCS and CCA. We now say good bye and good luck to each other. This meeting has taken part in a beautiful place, created by Nature, and I hope all of us have enjoyed our stay here. 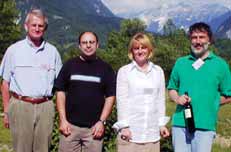 Plenary lecturers (left to right): J. Sieler, R. Loris, A. Mogus Milankovic, and D. Turk.
This meeting, I hope you share my opinion, has been a very successful meeting, as were the previous ones, scientifically and socially, offering a friendly and domestic atmosphere. We listened to four very nice plenary lectures, concerning modern approaches in crystallography. Forty-four short oral contributions were presented with different but contemporary topics in crystallography, including both data acquisition and interpretation. I would like to express our gratitude to the general lecturers, and to all of you who have come here to attend this meeting. There have been 61 active participants and 7 accompanying persons from 9 countries.

I would also like to express our thankfulness to the sponsors, who helped this meeting, because without their support the meeting would not have been possible. The Zagreb part of the Organizing Committee would like to express our gratitude to the Ljubljana part of the Committee, and especially to V. Leban, for their effort in preparation of the meeting. Also, we experienced a very interesting trip, visiting a museum of the World war I and a fortress from the 19th century, during which we learned much about the history of this part of Slovenia.

The 14th Croatian-Slovenian Crystallographic Meeting will be held in the middle of June, in 2005, in Istria, Croatia, in a touristic resort at the Adriatic coast. We cordially invite all of you to attend the next meeting. We would also appeal to you to bring your friends and coworkers, at home or in other countries. Thank all of you very much and good luck until the next meeting in Croatia.

Unfortunately, one month later the region of Bovec and Kobarid was hit by an earthquake which caused substantial damage, but fortunately no human victims.