The Future of CRYSTALS 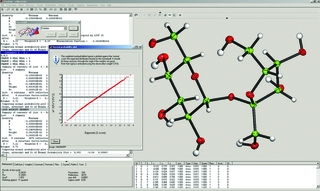 The CRYSTALS program is widely used by Chemical Crystallographers involved with running analytical services, research and teaching. It has been under continuous development since the first FORTRAN versions were created by John Rollett and Bob Carruthers during the 1970’s. A large number of people have contributed code or concepts for dealing with specific crystallographic problems, leading to a richness of procedures. A small number of people, in particular Paul Betteridge, Lisa Pearce and Richard Cooper have made substantial changes to the infra-structure to ensure that the program remains suitable for modern users. As well as the monolithic code in CRYSTALS, the program also acts as a convenient interface to programs dealing with cifs and several diffractometer data files. It also links smoothly with checkCIF, PLATON, SIR92, SIR2011, Superflip, SHELXS, Mercury, Mogul, and MCE (an electron density visualiser). My own role has been to generally look after the code, to respond to users requests and comments and run an e-mail help desk. Following my retirement in September 2011, I hope to continue to be involved with CRYSTALS.

After a period working with Oxford Diffraction, oXray and carrying out research into small-molecule docking with macromolecules at InhibOx, Richard Cooper (richard.cooper@chem.ox.ac.uk) has returned to Oxford to be my successor as head of the Chemical Crystallography Laboratory. In addition to all his other responsibilities, he plans to continue to look after CRYSTALS, and when time permits re-develop and extend it. Existing CRYSTALS users can be confident that it will be maintained into the foreseeable future, and non-users looking for a single integrated work environment might like to try the program. Oxford University has made the installation kit available to commercial and non-commercial uses without cost from our website: www.xtl.ox.ac.uk. Contact Richard for more details.