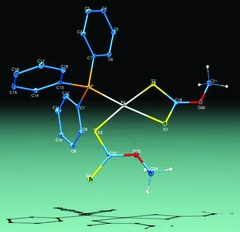 Crystal structure of the title compound with the numbering scheme. Displacement ellipsoids are shown at the 40% probability level. H atoms have been omitted for clarity.

Xanthate ligands are a kind of compound that can be coordinated to metal centers in different fashions, being found in coordination as monodentate, bidentate or even as a bridge. The title compound, [Pd(C2H3OS2)2(C18H15P)], features a palladium complex with a triphenylphosphane ligand and two xanthate ligands, one of which coordinates in a bidentate manner while the other is attached to the palladium only by one sulfur atom in a monodentate way. The Pd—S bond distances in the bidentate ligand of 2.3386 (6) Å for Pd—S2 and 2.3581 (6) Å for Pd—S1 are longer than Pd—S3 in the monodentate ligand. As a consequence of the differences in distances, C22—S4 has a double-bond character [1.649 (2) Å] and thus is shorter than C22—S3 [1.723 (2) Å], which shows a single-bond character.