ECA President, Santiago García-Granda, opened the meeting by summarising the numerous matters arising from the minutes of the ECA Executive Committee (EC) Meetings in Darmstadt 2010. The adhering body 'Chemists and Technologists of Macedonia, Division of Crystallography' joined ECA at the end of 2010. It is the 33rd National Member of the Association. Individual Members currently have three representatives on the ECA Council. By the request of the corporate affiliate members (CAM), with the agreement of the EC in Darmstadt, a CAM Councillor and deputy were elected to represent the approximately thirty CAMs of ECA. The CAMs will bring valuable expertise to the EC as they have widespread contacts with crystallographers and attend conferences throughout the World. It is also hoped that they will recruits new CAMs since the CAM Councillors have voting rights on the EC. It is important for the ECA to increase the number of individual members. Individual members can check their information and make any necessary updates on the publicly available webpage: www.ecanews.org/membership.php. 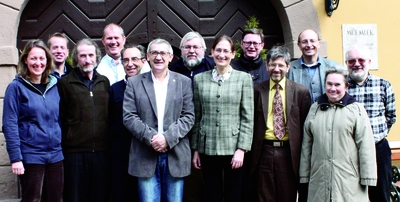 The activities of the Special Interest Groups (SIGs) are reviewed every year. In summary: the number of individual members registered with SIGs has increased significantly; the web form for online submission of the annual reports has been created and refined; online abstract submission will be available in 2012; and two thirds of SIG/GIGs now have web sites. A new system of networking groups has been introduced in the ECA. These are named 'General Interest Groups' (GIGs) and follow the same rules as the SIGs. The GIG - Young Crystallographers has already started to operate enthusiastically ad interim since 2010. The ECA is pleased to support the activities of the younger generation of crystallographers such as their organisation of scientific meetings, sessions and exchange of information. SIG13 and GIG1 cooperated to organize a IUCr22 satellite workshop for young crystallographers in Madrid. By request, the parallel establishment of a General Interest Group for Senior Scientists is also proceeding. The GIG for 'Teaching' and others may be established in the future.

Education of future generations of crystallographers at all levels is extremely important. A collaboration of several universities (U. Henri Poincaré Nancy, Charles University Prague and U. degli Studi di Padova, with contributions from the universities of Antwerp, Liège, Pays Vasco, Aveiro, Oviedo and ESRF, Grenoble) has submitted a propsal to establish a European Graduate School of Crystallography (Masters and PhD). The ECA supported eight conferences, workshops, and schools in 2011. The ECA is preparing to commemorate the centenary of the discovery of X-rays and the Friedrich, Kipping and Max von Laue celebration. The ECA also supports the initiative of the International Year of Crystallography 2014.

Hartmut Fuess, Chair of ECM26, gave a final report on the greatly successful event that took place in Darmstadt 2010 jointly with EPDIC12. The Chairs of ECM27 (Bergen 2012) and ECM28 (Warwick 2013) presented their organisation progress. Two documents, 'How to prepare and submit a bid to host a future ECM' and 'Guidance for ECM Organisers' have been placed on ECANews.

For information on the European Crystallographic Association please visit the ECANews website: www.ecanews.org.