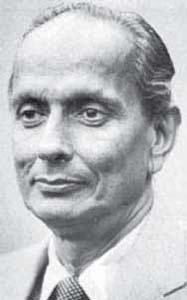 Sivaraj Ramaseshan, former Director of the Indian Inst. of Science and Professor-Emeritus at the Raman Research Inst., died in Bangalore on December 29, 2003. Born in 1923 at Nagpur, Ramaseshan had a career in science which stretched over half a century, during which he blazed a trail of original research and contributed enormously to the growth of many institutions of science in India.

Ramaseshan began his research career as a student under his legendary uncle, C.V. Raman. Following a Ph.D. in physics, he joined the faculty of the Indian Inst. of Science (IISc), Bangalore, as a lecturer. It was here that he established a vigorous school in the developing area of X-ray crystallography, in the 1950s. He returned to the institute in 1979 as its Joint Director, and later served as Director from 1981 to 1984. In the intervening period, Ramaseshan established the Physics Dept. at the Indian Inst. of Technology, Madras, and the Materials Science Div. at the National Aeronautical Laboratory (NAL). At NAL, Ramaseshan led a world class program which has proved critically important in the development of materials research in India. Optics, crystallography, and high pressure physics were areas where Ramaseshan made decisive and influential contributions, which were recognized by several national awards including the Padma Bhushan.

Ramaseshan was far more than a researcher lost in the technicalities of his chosen discipline. He was a builder of groups, institutions, scientific organizations, and academies. He was the prime architect of a movement to enhance the visibility, prestige, and content of science journals published from India. He was among the foremost popularizers of science in this country. To every sphere of his diverse activities Ramaseshan made distinctive and lasting contributions.

In 1984, when he formally retired from his position as the Director, IISc, he began a remarkable post-retirement phase, returning to a routine of research, seminars, writing, and lecturing.

In 1989, he took over the editorship of Current Science. This journal, founded in 1932, had an illustrious past but had fallen on hard times, with diminishing circulation and visibility. He brought to the task of rejuvenating Current Science, a remarkable sense of purpose and boundless optimism, succeeding in his task, before failing health began to take its toll.

When C.V. Raman died in 1970, he left three institutions: the Raman Research Inst., the Indian Academy of Sciences, and the Current Science Association, all of which he had presided over for long periods of time. In the years that followed, Ramaseshan, more than anyone else, tended to the Raman legacy, ensuring that these organizations acquired a new and distinctive character. He served on their councils and governing bodies for long periods of time, devoting considerable effort towards their welfare. He served as the President of the Indian Academy of Sciences between 1983 and 1985.

In reflecting on the life and times of Ramaseshan, we must also remember his great contemporaries, G.N. Ramachandran (1922-2001) and Satish Dhawan (1920-2002). For a brief period, in the transition years between the 1970s and 1980s, all three were at IISc. They were three entirely different personalities, but they all bore the indelible stamp of greatness, contributing substantially to the growth of our science and our institutions. With Ramachandran, Ramaseshan shared a deep and abiding interest in optics and crystallography. With Dhawan, he shared a total commitment to building and fostering the institutions on which this country's progress depends.

Ramaseshan was incurably romantic about science. In 1978, delivering the first C.V. Raman Memorial Lecture at IISc, he recalled: 'To Raman, scientific activity was the fulfillment of an inner need. His approach to science was one of passion, curiosity, and simplicity. It was an attempt to understand. To him science was based on independent thought, combined with hard work. Science was a personal endeavor, an aesthetic pursuit, and above all, a joyous experience.' In full measure, these words also describe Ramaseshan's approach to science. He was an outstanding lecturer and conversationalist. His self-deprecatory humor and ability to laugh at himself were engaging. Sivaraj Ramaseshan lived a full life, contributing greatly to his surroundings. Those who knew him personally were immeasurably enriched. In his death, science in India has lost
one of its most distinguished practitioners.