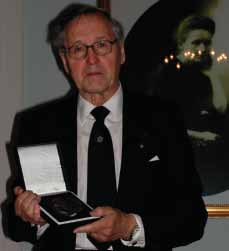 Ivar Olovsson.
The Polish Chemical Society awards its prestigious Maria Sklodowska-Curie Medal to outstanding chemists working permanently abroad. The Medal for the year 2003 went to Ivar Olovsson of the U. of Uppsala (Sweden) for his crystallographic studies of the structure of matter, especially for his fundamental studies of the hydrogen bond. The award ceremony had a particularly solemn character. It was part of a special session, organized jointly by the Polish Chemical Society and by the Polish Academy of Sciences (represented by Vice President, Janusz Lipkowski) to celebrate the 100th Anniversary of Maria Sklodowska-Curie’s first Nobel Prize. The 1903 Nobel Prize in Physics Maria Sklodowska-Curie received jointly with her husband Pierre Curie and Henri Becquerel. (In 1911 she received her second Nobel Prize, this time in chemistry and all by herself.) In his prize award lecture, Ivar Olovsson spoke about Wilhelm Conrad Roentgen (the first Nobel Prize in Physics) and his discovery of X-rays in the context of the fertile times of fundamental discoveries in physics, which also included the discovery of radioactivity.
Mariusz Jaskolski (Poznan)