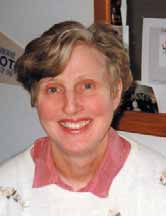 Rosemary Durley (nee Belford) was born in Edinburgh, Scotland in 1948, and grew up in Belfast, Northern Ireland. Rosemary received a B.Sc. degree from Bristol University in 1968, and then moved to Birkbeck College, London where she earned a master's degree. She went on to do research on crystal structures at University College, London with Jackie Truter and received her Ph.D. in 1973. She was appointed Assistant Professor at the University of Saskatoon, Canada in 1974, where she continued her research as well as teaching chemistry. After taking time off to raise two children, she returned to academia at Washington University, St. Louis, Missouri in 1988 to work with F. Scott Mathews. She used X-ray crystallography to study the crystal structures of enzyme complexes involved in oxidationreduction pathways and related redox co-factors. In particular, she studied the mechanism of flavocytochrome redox complexes and methylamine dehydrogenase redox chain complexes. She had many publications in this field and made many presentations. In 2000 she retired due to chronic illness. She passed away on December 29, 2003. She is survived by her husband, Richard, and two children, Alison and Stephen.