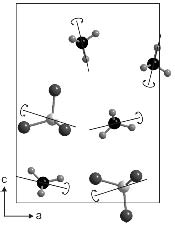 Projection of the basic structure of (NH4)2BeF4. Rotation axes describing the modulations of the complex ions are indicated. Be atoms light gray; N atoms black.
Ammonium tetrafluoroberyllate has an incommensurately modulated phase that is stable in a narrow temperature interval (175–182 K) between the paraelectric and low-temperature ferroelectric phases. The structure of this phase is difficult to determine because of a narrow interval of stability and partial overlap of reflections. Structure refinements and the Maximum Entropy Method in superspace show that the modulation comprises single harmonic rotations and translations of rigid BeF42− and NH4− complex ions. The development of the modulation is driven by changes in the network of hydrogen bonds. The ferroelectric transition is driven by the development of the ferroelectric polarization, as evidenced by the presence of second harmonic modulation amplitudes in the low-temperature crystal structure.
L. Palatinus, M. Amami and S. van Smaalen